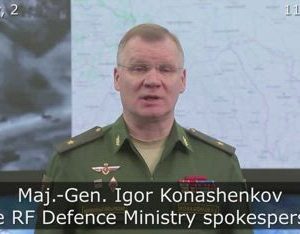 ✈️💥Operational-tactical and army aviation of the Russian Aerospace Forces have hit 27 strong points, areas of AFU manpower and military equipment concentration, as well as 1 missile-artillery weapons and ammunition depot near Chervonoe, Zaporozhye Region.

▫️The attacks have resulted in the elimination of more than 160 nationalists and up to 26 Ukrainian armoured vehicles.

💥Missile troops have struck 9 strong points and areas of concentration of manpower and equipment, as well as 1 Ukrainian battery of BM-21 Grad MLRS and 1 artillery battery at firing positions during the day.

▫️The attacks have resulted in the elimination of more than 280 nationalists and up to 43 units of AFU weapons and military equipment.

▫️2 Tochka-U tactical missiles were shot down near Petrovskoe in Lugansk People’s Republic and 1 Smerch rocket were destroyed near Donetskoe.

▫️1 Ukrainian MiG-29 fighter jet has been shot down in an aerial battle near Slavyansk.

📊In total, 146 aircraft and 112 helicopters, 683 unmanned aerial vehicles, 281 anti-aircraft missile systems, 2,756 tanks and other armored combat vehicles, 316 multiple launch rocket systems, 1,234 field artillery and mortars, as well as 2,563 units of special military vehicles of the Armed Forces of Ukraine were destroyed during the operation.