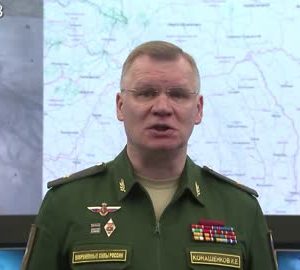 ▫️Over the past 24 hours, 694 militants have laid down arms and surrendered, including 29 wounded.

📊A total of 959 militants have surrendered since 16 May, including 80 wounded, of whom 51 need hospital treatment have been admitted to Novoazovsk hospital in the Donetsk People’s Republic.

💥Over a day, high-precision air-based missiles of the Russian Aerospace Forces have hit 2 command posts, including the territorial defence headquarters near Soledar in the Donetsk People’s Republic, as well as 31 areas of concentration of Ukrainian manpower and military equipment, including locations of foreign mercenary units from European countries in Nikolaev and Krasnogorovka.

▫️In addition, 2 Ukrainian Su-24 aircraft have been destroyed at a military airfield near Dnepropetrovsk, 1 division of Ukrainian S-300 anti-aircraft missile systems near Nikolaev, as well as 4 ammunition depots for missile and artillery weapons and ammunition of the Ukrainian Armed Forces near Ugledar, Pokrovskoe, Soledar and Bakhmut, Donetsk People’s Republic.

▫️The attacks have resulted in the elimination of more than 270 nationalists and up to 54 armoured and motor vehicles.

💥Missile troops and artillery have hit 76 command posts, 421 areas of manpower and military equipment concentration, as well as 147 artillery and mortar units at firing positions, including 1 Ukrainian battery of US-made 155mm M777 howitzers near Pogornoe.

◽️The deployment of enemy armoured vehicles and preparations for the attack were uncovered by Russian UAVs and technical reconnaissance assets.

💥 The enemy’s armoured vehicles were attacked by UAVs and artillery units during their advance and deployment at the attack line, after which the attack was repelled by fire from tanks, infantry fighting vehicles and modern anti-tank weapons.

💥 The retreating Ukrainian tanks and IFVs were destroyed by artillery fire.

📊 As a result of the Kiev regime’s futile adventure, 26 Ukrainian tanks, 12 IFVs and about 100 fighters were destroyed.


Russians interrogate the Azovstal fighters who surrendered according to “basic protocol…”