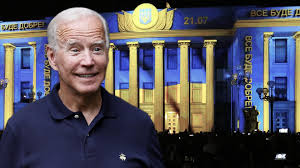 The Biden regime failed to pay National Guard troops their year-end pay on time during the week of Christmas, according to reports.

This comes after Biden and Congress approved another $45 billion aid package to Ukraine and the House passing a $1.7 trillion spending plan.

“Hello gents,” began a letter sent to members of the National Guard, obtained by The Post Millennial, “if you have been tracking, the pay issue that has been plaguing the unit and the division as well.”

“You are probably already tracking there are pay issues. Many soldiers were due pay today.”

“They received LES but did not receive funds,” the letter noted, referring to a Leave and Earning Statement, a pay stub without accompanying funds.

The letter added the lack of pay is a “nation wide” issue, which “seems to be at DFAS [Defense Finance and Accounting Service] and is related to the CR.”

Ukraine gets economic development, agriculture, and border patrol. We get racial equity mandates for us here at home.

I'm not sorry @LaurenBoebert and I won't stand for it. pic.twitter.com/OZqF1cgyAd

“This is unfortunate and can cause serious issues and aggravation across the formation which are understandable. Especially 2 days before Christmas,” the letter stated. “I think the messaging is important that it’s understood the issues are at the highest levels and that everyone in the Division and State are pushing for immediate resolution.”

Another email posted on Twitter by Georgia National Guard soldier James Jarrett revealed that payments won’t be fulfilled until the 2023 budget is signed by Congress.

“All payments scheduled for 23 DEC are being held until the new FY23 budget is fully approved and signed congress passed the FY23 budget yesterday the housr [sic] has to approve it and then to POTUS to sign hopefully by today.”

@jamiedupree @FoxNews @wsbtv @wsbradio I was wondering if anyone was covering this. The Georgia National Guard was supposed to receive pay today from our previous drill. So, is this how “We Support Our Troops” goes? Shouldn’t paychecks already be part of allotted money? pic.twitter.com/TeRCfwXUeE

“With that being said, DFAS is holding all payments until new budget is signed,” the email continued. “From what im being told funds hopefully will be released tonight if it’s signed by POTUS today.”

Meanwhile, the House approved the $1.7 trillion spending plan on Friday, $45 billion of which is earmarked for Ukraine.

The bill will now head to Biden’s desk.

Ukrainian President Volodymyr Zelensky feels so entitled to U.S. taxpayer money that he even complained to Biden that $45 billion wasn’t enough!

Ironically, Biden had spouted platitudes on Twitter about taking care of American soldiers just a day before Congress approved billions of dollars to Ukraine.

“We have a lot of obligations as Americans, but we have only one sacred obligation: To prepare those we send to war and care for them and their families when they come home,” he tweeted Wednesday.

We have a lot of obligations as Americans, but we have only one sacred obligation:

To prepare those we send to war and care for them and their families when they come home.

If this unfortunate development doesn’t expose the Biden regime’s America Last priorities, than nothing does.

Shoutout to congress for holding the entire national guard and reserves pay!!! Best Christmas gift I could get thanks Congress I love being fucked over!!!

https://www.youtube.com/watch?v=8RMcCROhmJ0 Emil Cosman discusses Dropping the US dollar continues. Africa and Russia will not use the Dollar in trade

https://www.youtube.com/watch?v=LXvfsWVgTlU US Debt Crisis: Debt, Debt Everywhere - Debt You Can't Get Rid of

https://www.youtube.com/watch?v=yTyHFT1Dl4I&list=LL&index=2 Most Americans don’t know what the “petrodollar” is, but the nation’s ongoing prosperity absolutely depends on it, and international...

The global currency wars are accelerating rapidly now, and nations like Russia, China and Iran are about to roll out...