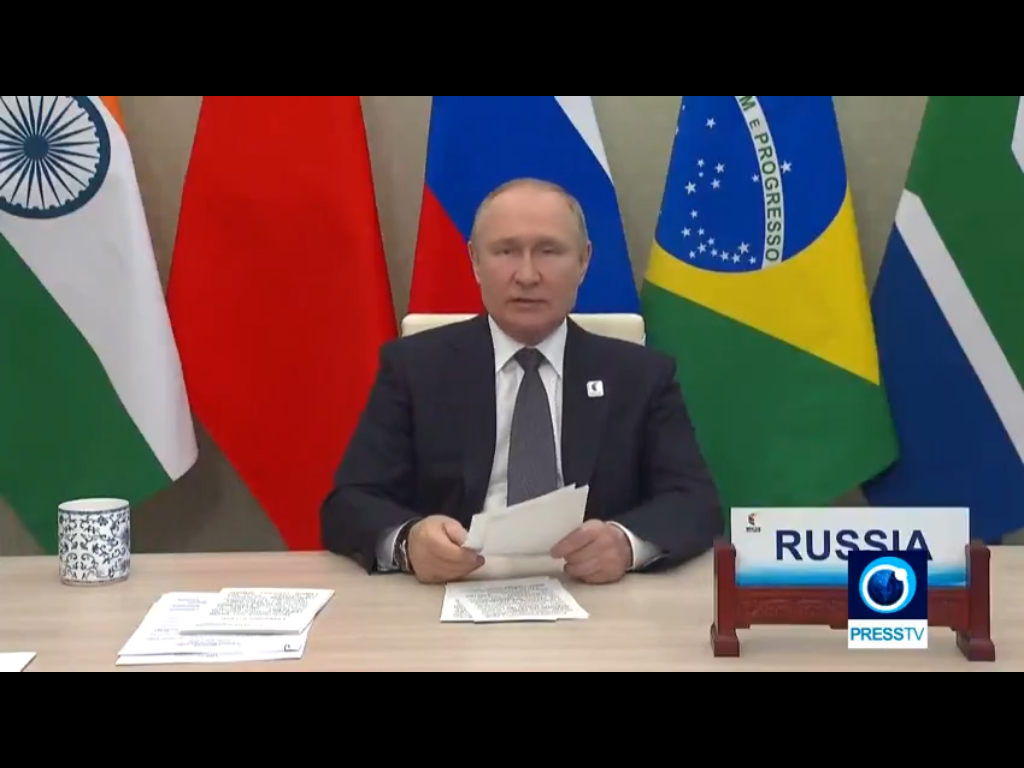 Russian President Vladimir Putin has called on members of the BRICS group of countries to further strengthen cooperation in the face of “selfish actions” taken by the West, scolding it for fomenting global crises.

Putin made the remarks in a televised speech he delivered at the BRICS Business Forum virtual summit, which was attended by the group’s top leaders, on Thursday.

“The countries of our alliance (BRICS) are intensifying their cooperation on a whole range of issues of international and regional agenda. BRICS countries’ authority and global influence are growing with every year. It’s an objective process because the BRICS Five are well known for having enormous political, economic, scientific and social potential. We have all the opportunities to work together effectively and to develop global stability and security, sustainable growth, prosperity and improvements to the well-being of the population,” Putin said.

“The current crisis in the global economy, which is due to the ill-conceived and selfish actions of some countries who use financial mechanisms to blame others the world over for their own macroeconomic policy faults, can be solved only through honest and mutually-beneficial cooperation,” the Russian president added.

“We believe the theme of today’s meeting – strengthening high-quality, multilateral BRICS cooperation – is relevant as we step into a new era of global development,” Putin noted.

He then said, “The difficult and transnational challenges that the international community is now facing require us to look for collective answers with participation from our alliance. We have repeatedly said that tasks such as conflict resolution, the fight against terrorism and organized crime, including the use of modern technologies for criminal purposes, and the fight against climate change and dangerous infections can only be solved by working together.”

“We are convinced that now, more than ever, the leadership of BRICS countries is needed to develop a unifying, positive course toward the formation of a truly multipolar system of inter-government relations,” Putin further said.

The Russian leader said BRICS nations “can count on the support of many Asian, African and Latin American states striving to pursue an independent policy.”

The BRICS, which is composed of Brazil, Russia, India, China, and South Africa, collectively represents more than 40 percent of the world’s population.

Putin also stressed that Russia-China relations are the best ever, touting a strategic partnership with China aimed at countering US influence.

Also at the virtual BRICS summit on Thursday, Chinese President Xi Jinping lambasted “the abuse” of international sanctions, and in line with Putin, called for greater BRICS cooperation.

The Chinese leader also called on other members of the group to take up the responsibility conferred by their economic clout, stressing that they should stand up for a truly multinational international system based on the United Nations.

“We must abandon Cold War mentality and block confrontation and oppose unilateral sanctions – and the abuse of sanctions,” Xi said.

“Our meeting today comes at a crucial moment of choice for the future of humanity: as key emerging markets and developing countries, BRICS countries must rise to our responsibility.”

“This Summit is held at a critical juncture in the shaping of the future course of humanity. BRICS countries, as important emerging markets and major developing countries, need to act with a sense of responsibility to bring positive, stabilizing and constructive strength to the world,” he said.

China has by far the largest economy among the BRICS member states, accounting for over 70 percent of the group’s collective $27.5 trillion economic might.