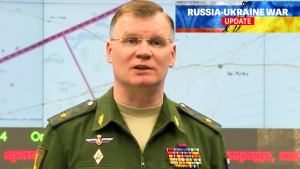 💥High-precision Onyx missiles near Odessa have destroyed a hangar at a military airfield with arms and ammunition from the US and European countries, as well as the runway.

▫️Among them: 4 areas of manpower and military equipment concentration, as well as 3 missile-artillery weapons and ammunition depots near Beryozovoye in the Donetsk People’s Republic, Slatino and Barvenkovo, Kharkov Region.

✈️💥Operational-tactical and army aviation of the Russian Aerospace Forces have destroyed 2 Ukrainian S-300 anti-aircraft missile systems near Zaporozhye and Artemovsk.

▫️2 ammunition and fuel depots near Privolnoe and Shevchenko in Zaporozhye Region have been hit, as well as 15 strong points and areas of manpower and equipment concentration.

▫️The attacks have resulted in the elimination of more than 140 nationalists and up to 19 Ukrainian armoured vehicles.

💥Missile troops and artillery have hit 786 areas of concentration of AFU manpower and military equipment, 24 command posts and 3 misiile-artillery weapons and ammunition depots near Grushevaha during the day.

▫️The attacks have resulted in the elimination of more than 200 Ukrainian military personnel and up to 20 units of military equipment.

▫️2 Ukrainian Tochka-U ballistic missiles have been shot down over Tokmak, Zaporozhye Region.

▫️2 Ukrainian Smerch rockets have been also shot down over Semenovka, Kharkov Region.

📊In total, 145 aircraft and 112 helicopters, 672 unmanned aerial vehicles, 281 anti-aircraft missile systems, 2,703 tanks and other armored combat vehicles, 312 multiple launch rocket systems, 1,203 field artillery and mortars, as well as 2,514 units of special military vehicles of the Armed Forces of Ukraine were destroyed during the operation.