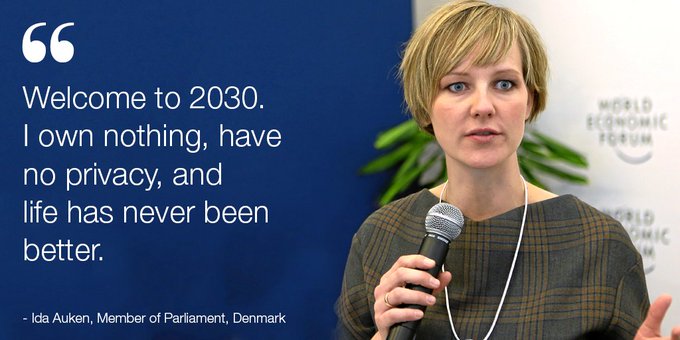 Tesla CEO Elon Musk took to his newly acquired social media platform over the weekend to make a series of quips aimed at the global organization, the World Economic Forum (WEF).

The WEF’s annual meeting in Davos, Switzerland—which features a host of international leaders, central bankers, Wall Street executives, and celebrities—began on Monday and will continue throughout the week.

“I guess there’s value to having a mixed government & commercial forum of some kind. WEF does kinda give me the willies though, but I’m sure everything is fine…” Musk said via Twitter on Sunday evening, responding to a Substack article co-written by independent journalists Michael Shellenberger and Izabella Kaminska.

The WEF has been the subject of considerable scorn and criticism for its 2016 ad campaign, which stated, “Welcome to 2030. I own nothing, have no privacy, and life has never been better.”

Many took issue with the organization’s attempt to frame a lack of personal ownership and privacy as a positive.

Initially accompanied by a promotional video and several articles, much of the campaign’s content has since been removed from the web. A tweet by the WEF remains up, however.

Welcome to 2030. I own nothing, have no privacy, and life has never been better @IdaAuken https://t.co/6BKymvbKB5 pic.twitter.com/YJjAkw8skS

In their article, Shellenberger and Kaminska called out WEF Managing Director Adrian Monck, who blamed the uproar surrounding the ad on the right-wing message board 4chan.

Monck penned an opinion piece in the Canadian outlet The Globe and Mail last August, calling the backlash a “misinformation campaign that targeted the World Economic Forum.”

“The story of ‘you’ll own nothing and be happy’ is anything but trivial and offers valuable insights into how misinformation is created and why it’s essential not to perpetuate its spread,” Monck wrote, adding that many criticisms were racist and anti-semitic.

Shellenberger and Kamiska, linking to the now-deleted WEF content, refuted Monck’s claims. “What Monck claimed was inaccurate. The phrase ‘Own nothing, be happy,’ hadn’t originated on 4chan; it originated on WEF’s website,” they wrote.

Musk continued to crack jokes about the organization. “There should be a game show: “4Chan or Davos, who said it?” he said via Twitter on Monday afternoon.

The authors also highlighted the organizations’ lack of transparency and declared commitment to the environmental, social, and governance (ESG) agenda. The WEF is outspoken in its allegiance to the ESG movement.

“Recent events have only increased the business world’s focus on ESG,” reads a statement from the WEF website. “Worker wellness has become a major concern during the COVID-19 pandemic; social justice protests have drawn attention to gaps in diversity, equity, and inclusion; and the impacts of climate change and the importance of environmental sustainability are becoming harder, if not impossible, to ignore.”

Despite founding the world’s largest electric vehicle company, Musk is not a fan of ESG.

“The S in ESG stands for Satanic,” tweeted Musk in response. It is not the billionaire’s first comparison of this nature, he referred to the movement as “the devil” back in November.

In 2008, WEF listed Musk among its “Young Global Leaders” — which the organization classifies as a “membership” program — though it is unclear whether Musk participated in this arrangement. “I was invited to WEF, but declined,” he said via Twitter in December, responding to allegations that he had a relationship with the international group.

The Twitter CEO also responded to a video, featuring a speech by WEF founder Klaus Schwab, in which Schwab warns that a global cyberattack could disrupt supply chains and make the COVID-19 crisis look like “a small disturbance” in comparison.

The WEF founder warned that such an attack “would bring a complete halt to the power supply, transportation, hospital services, our society as a whole.”

Accompanied by daunting music and provocative imagery, the cinematic clip caught the attention of Musk. “This movie writes itself,” Musk responded with a popcorn emoji.

Schellenberger emphasized that Schwab is more than a figurehead. “Schwab has become, without question, one of the most influential men alive,” tweeted the journalist while promoting his article.

Schwab has been criticized for his book COVID-19: The Great Reset, which advocated for governments around the globe to use the pandemic as an opportunity to “reimagine capitalism.”

The WEF has also been heavily criticized for promoting insects as a potential dietary source. A February article by the organization titled “5 reasons why eating insects could reduce climate change” attempts to dispel commonly held stigmas about eating bugs.

“Before you say ‘yuck,’ hear us out,” the article reads.

(You can cancel at any time).
InDavos, WEF