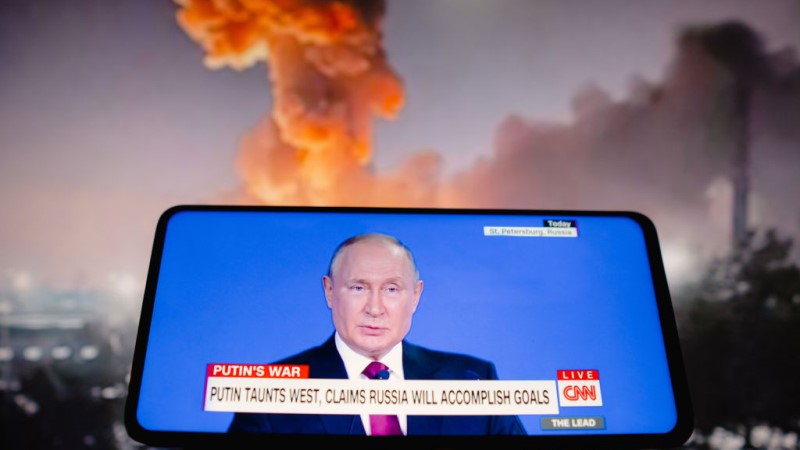 The Russian Ministry of Defense (MOD) on Thursday accused left-wing US media outlet CNN of conspiring with the Ukrainian military’s neo-Nazi Azov fighters to film a staged attack on civilians.

In a press release on their Telegram, as most Russian government agencies have been banned by major Western social media companies, the MOD specifically claimed Ukraine’s 72nd Centre for information and Psychological Operations of the Armed Forces of Ukraine (AFU) in Kharkov are preparing a false flag.

The statement, titled, “Statement of the Joint Coordination Headquarters of the Russian Federation for Humanitarian Response,” said Ukraine will soon unleash “another cynical provocation with deaths amongst civilian population to accuse the Russian Armed Forces of launching indiscriminate attacks against civilian facilities.”


Russia alleged elements of the Ukrainian military are taking hospital staff and sick children from around Kharkov and moving them to the city’s First Child Health Hospital, which is supposedly known to be wired with explosive mines.

“The building of the hospital is mined and neo-Nazis are planning to explode it as soon as Russian troops launch artillery attacks at the military facilities in Kharkov,” the Russian government said. “Correspondents from leading Western news agencies have already arrived in the city to prepare fake photos and videos.”

Who are these Western news agencies?

None other than CNN is directly named by Russia as having “two reporters” being “escorted by 10 servicemen of Azov nationalist battalion.”

The CNN correspondents were said to have “arrived in Odessa for recording prepared terrorist attacks on civilian facilities in order to accuse Russia of using prohibited methods of warfare.”

Continuing, the Russian government again said they do not have a policy of attacking civilian infrastructure, a notion supported by their slow-paced military tactics used in the Ukraine operation thus far.

Furthermore, the statement noted multiple instances where “nationalist battalions,” otherwise known as neo-Nazi brigades, have occupied and placed military equipment in “educational institutions, houses of culture and other social facilities.”

Russian President Vladimir Putin’s government warned the people of Europe and North America “that the abovementioned and other provocations by the Ukrainian authorities about the ‘atrocities of the Russians’ are soon to be widely circulated through the Western media and in various resources of the Internet.”

This accusation coming from the world’s largest nation, which is constantly in the news regarding the war in Ukraine, is extremely hard to find online in America while it should be a massive story.

As independent journalist Clandestine joked in his Substack newsletter Thursday, “It’s fine. Just CNN working with Nazis in Ukraine to film a planned terrorist attack and blame it on Russia, to cover up for their Deep State overlords who got caught making bioweapons in Ukraine. Nothing to see here folks.”

Dissecting the thought process behind false flag attacks being waged by Ukraine, Clandestine explained that “logically speaking, it benefits Ukraine much more for Ukrainian civilians to die, than it befits Russia.”

“Civilians die and they can push emotional propaganda, the world comes to aid Ukraine, and Putin is viewed as a dictator. But what happens when Putin doesn’t kill any civilians, and starts exposing the biolab network? The Nazis take it upon themselves to kill the civilians,” he wrote.

These tactics align with those used by the American CIA, which helped train the Nazi Azov brigade on-record.

It seems like the Deep State is becoming more desperate to cover up their crimes in Ukraine, from the illegal biolab network to shady business deals and money laundering.