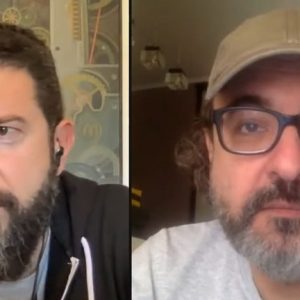 Chilean-American blogger Gonzalo Lira, who went missing in the Ukrainian city of Kharkov a week ago, has appeared online on Friday, revealing that he had been held by the Ukrainian Security Service (SBU).

“I’m in Kharkov. I’m OK. I just want to say that I’m back online.” Lira said in short video chat with journalist Alex Christoforou on The Duran channel on YouTube.

“I was picked up by the SBU on Friday, April 15,” the blogger revealed.

Speaking about his condition, the 54-year-old said that he was “fine physically,” but “a little rattled” and “a little bit discombobulated.” Lira made it clear that he was forbidden from revealing any details about what had happened to him in detention.

“I’m still in Kharkov and for the time being I cannot leave. The authorities here told me that I cannot leave the city,” he said, adding that his computer and phone were taken away and that he didn’t have access to his accounts on social media.

“There seems to have been like a lot of interest in my case, which is wonderful. Thank you. But there are a lot of other people, who are frankly more deserving of the attention,” the blogger said. Lira was referring to his tweet from March 26, in which he listed the names of Ukrainian opposition figures, who are thought to have died or disappeared since the outbreak of the conflict, adding then that “if you haven’t heard from me in 12 hours or more, put my name on this list.”

Since the start of the Russian military operation in Ukraine, Lira has been using YouTube, Twitter and Telegram to criticize President Volodymyr Zelensky and Kiev’s conduct on the battlefield, while also speaking about far-right tendencies among the Ukrainian military and debunking what he saw as false reports about events on the ground. After the blogger’s disappearance, some unconfirmed claims emerged that he could have been kidnapped by nationalists linked to the notorious Azov battalion, and even executed.

Lira who penned the novel ‘Acrobat’ and is a filmmaker with Hollywood experience had earlier claimed that the SBU had made at least two other attempts to detain him, but he was lucky to avoid arrest.

Lira also accused the Daily Beast of attracting Kiev’s attention to his work and revealing his location to the country’s law enforcers. The left-wing US outlet dedicated a large article to the blogger on March 21, slamming him as “a Pro-Putin shill in Ukraine.” In the piece, Daily Beast journalists said they had contacted Ukrainian authorities to learn about the man’s whereabouts and to clarify if he was still in Kharkov in the east of the country.