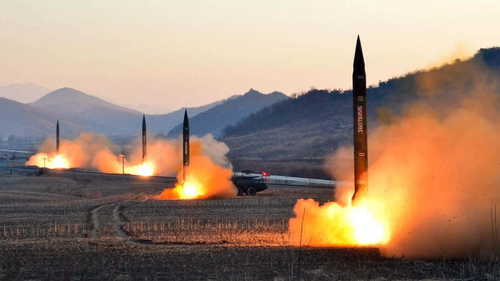 This comes after the north fired off 23 missiles of different types on Wednesday, which marks the most in a single day. By some estimates, at least 27 missiles have been launched in the last 24 hours. All of this brings the total missiles fired so far this year to at least 60.

“The projectiles, including a suspected intercontinental ballistic missile, have triggered alerts, prompting some residents to seek shelter in two countries — South Korea and Japan — on both days,” according to one US media report.

Japan’s Prime Minister Fumio Kishida has condemned the launches as “intolerable.” Inbound projectile alerts had been issued for three regions of Japan on fears the ICBM was headed toward or over Japan.

However, the ICBM launch may have failed:

The largest of Thursday’s launches, however, “is presumed to have ended in failure,” the South Korean military said.

NPR has cited a South Korean former defense official to say that Pyongyang’s strategy seems to be to sow confusion and put US allies on edge over how to defend against a potential attack:

“First, they launched missiles from all around the country — east, west, south, north,” he explains. “This seems intended to negate our strategy of striking the source of attack.”

The US is seeking for allies and other regional major powers to increase pressure on Pyongyang: “This action underscores the need for all countries to fully implement DPRK-related UN Security Council resolutions,” said State Department spokesman Ned Price in the wake of the fresh launches.