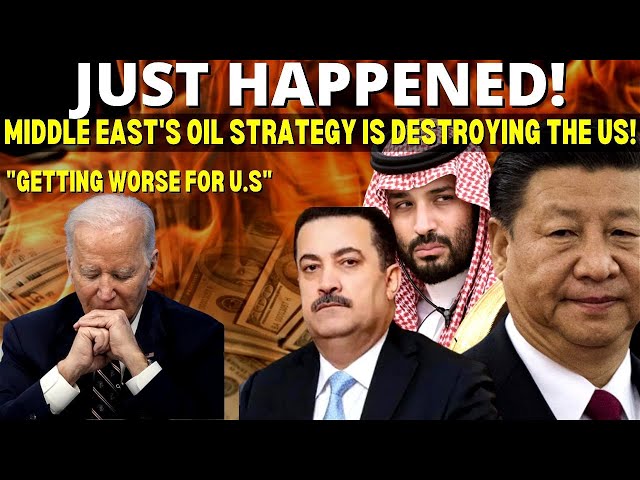 US efforts to draw the administration of Mohammed Shia Al-Sudani closer to the US appear to be failing, as Iranian influence in Iraq appears to be winning out.

You see, the Iraqis want to keep communicating with countries like China, Russia, and Iran. And experts say Baghdad has already taken steps toward finalizing future deals with these nations.

Recently, Al Sudani has stated his desire to strengthen Iraq’s involvement in OPEC. But since production has been slashed, this is in a problematic setting. In addition, Iraq just announced its massive new oil energy deals with Russia and China, which means they’re backing off from the US!

Firstly, the remarkable ‘oil-for-projects’ deal between Iraq and China was inked in the middle of 2019. And the Iraqi Oil Minister shows no indications of altering it.

Local state-backed media outlets did indicate that several seismic surveys had been initiated, this time by the Oil Exploration Company or OEC of Iraq and the China National Offshore Oil Corporation or CNOOC.

This is part of the initial stages of extensive oil and gas exploration between Iraq and China in the waters off their coasts.

Now, CNOOC has begun a joint research contract for two-dimensional seismic and geophysical surveys to investigate potential hydrocarbon gathers in the Iraqi offshores north of the Arabian Gulf.

That’s completely in line with what the Iraqi government ordered back in October. And the 2019 oil-for projects deal between Iraq and China was mandated to cover ‘vital and significant projects.

Roads, bridges, infrastructure, energy, oil, and electricity are “important and crucial projects.” Moreover, when it comes to oil and gas exploration and production in international waters, China can do anything it wants.

But Iraq is also letting Beijing increase its influence in critical onshore areas. The middle of October saw the CPECC inking an EPC contract for a two-train oil processing plant at the cost of $386 million at Quraynat. Now, the southern portion of Iraq’s largest oilfield, the Rumaila field, will be developed for production.

And each train will process around 120,000 barrels per day of oil from the Mishrif formation at the site. The Rumaila field is an exciting new development in the neighborhood.

And it is located around 30 km north of Iraq’s southern border with Kuwait. The Rumaila Operating Organization or ROO is currently in charge of the territory. It is a partnership between the British Oil Company, the Basra Energy Company, and the Iraqi State Organization for the Marketing of Oil.

Now, it was initially planned for BP to increase output to 2.1 million BPD in November 2020. It originated at a rate of 1.4 million barrels per day, almost the same as it was a decade ago. It also has proven reserves of over 17 billion barrels.

Thus, Rumaila is an excellent illustration of a sector in which modest investments might significantly boost crude oil output. However, in 2020, BP’s national chief offered a response on the matter. He noted that talks on the next steps are now taking place between the oil ministry and Basra Oil Co. Low oil prices and the ministry’s suggestion that all IOCs reduce their activity sets this year are the reasons behind this.

Now, BP’s original goal was to increase output by 100,000 barrels annually, reaching a total of 2.3–2.4 million BPD by 2020. And the lack of work on the Common Seawater Supply Project water-injection projection project has been the primary hurdle to attaining this output growth.

Also, it’s primarily due to IOC worries tied to pervasive corruption in Iraq’s oil sector. Without the CSSP, Iraq will not be able to increase its oil production to what it had hoped for. This year they want to reach 6.2 million BPD, and by the end of 2023, they want to go 9 million BPD.

However, the new goal is to increase oil output to 7 million BPD by 2025, making this a crucial factor. This may also provide insight into Iraq’s longstanding financial obligations to foreign oil firms.

Europe has relied on U.S. LNG imports to offset the loss of Russian gas, with nearly 70% of U.S. LNG...