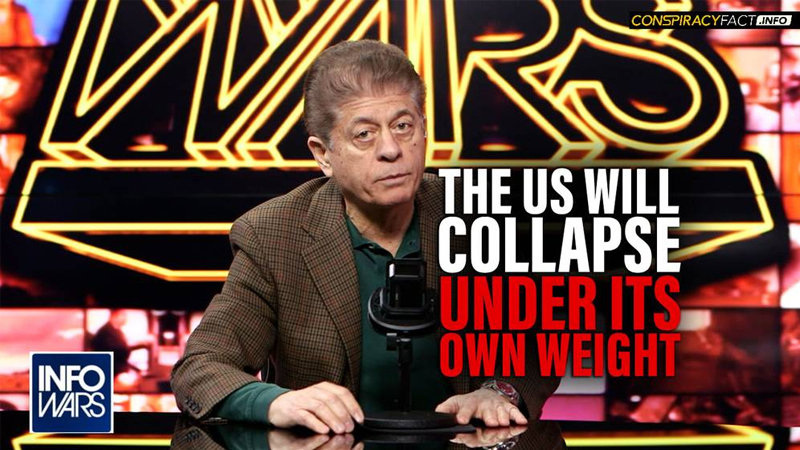 Judge Andrew Napolitano joined The Alex Jones Show in-studio to make his prediction on the future of the United States of America collapsing under the weight of its own authoritarianism.

“I’m sorry to say, I’m not optimistic, Alex,” he said Friday. “I think the United States of America, the federal government will collapse of its own weight.”

“It won’t be able to pay its bills, nobody will want to work for it, just like the old Soviet Union,” he said, adding the US “will break apart into a dozen or half dozen Republics.”

“Down here in Texas, there will be a lot more freedom than where I live in the northeast. But you’ll be able to vote with your feet, as Ronald Reagan used to say, and go where you want to live. But there will be no federal government,” he said.

“There will be no Chuck Schumers and Nancy Pelosis,” he continued. “And even Kevin McCarthys as far as I’m concerned. It’s the same party, it’s the same big government party with the Republican wing and Democrat wing.”

“But that crowd won’t be around anymore. Government will be smaller and more local and more responsive to the people. There will be fallout, of course,” he said, adding the collapse may happen in the next “25, 30 or 40 years.”

(You can cancel at any time).
InAlex Jones, Andrew Napolitano