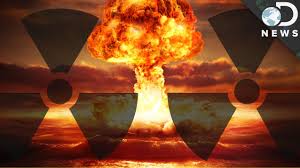 Ukraine preparing to deploy ‘dirty bomb’ within its country to accuse Moscow of using weapons of mass destruction.

Russian President Vladimir Putin has repeatedly warned that there can be no winner in a nuclear war, and that it should never be unleashed.

The Kiev regime is preparing a provocation related to the detonation of the so-called “dirty bomb” in Ukraine, unnamed credible sources in various countries, including Ukraine, have said.

A “dirty bomb”, also known as a “radiological dispersal device,” or RDD, combines a conventional explosive with radioactive material. Such a bomb typically uses dynamite or other explosives to scatter radioactive dust or smoke so as to cause radioactive contamination.

The sources argued that the purpose of the provocation is to accuse Moscow of using weapons of mass destruction amid the ongoing Russian special military operation in Ukraine and launch a global anti-Russian campaign aimed at undermining confidence in Moscow.

According to the insiders, the administration of the Eastern Mining and Processing Plant located in the town of Zholtye Vody in Ukraine’s Dnepropetrovsk region, as well as the Kiev Institute for Nuclear Research, was tasked with making the “dirty bomb”, a process that the sources said is being overseen by Kiev’s Western curators.

The insiders added that the organizers of the provocation hope that if successfully implemented, the “nuclear incident” will prompt an extremely negative reaction from the international community. As a result, Moscow will lose the support of many of its key partners, while the West will again try to raise the issue of depriving Russia of the status of a permanent member of the UN Security Council and ramp up its anti-Russian rhetoric, according to the sources.

The claims come after the Russian Foreign Ministry underscored last week that Moscow does not threaten anyone with nuclear weapons, and that it is Western powers who use nuclear rhetoric, trying to make it look like Russia is preparing to deliver strikes using weapons of mass destruction.

Peskov told Sputnik that Zelensky’s statements about “preventive nuclear strikes” against Russia should not be ignored by the international community, since those remarks are nothing but a call to start World War 3, which would entail catastrophic consequences.

The Kremlin spokesman underscored that the US and the UK, which “de facto run Kiev,” should bear responsibility for Zelensky’s statements.

No Winners in Nuclear War

Russian President Vladimir Putin has repeatedly said that there could be no winners in a nuclear war, noting that Moscow consistently followed the letter and spirit of the Treaty on the Non-Proliferation of Nuclear Weapons (NPT).

Scenarios under which Russia could theoretically use nuclear weapons are set out in the Russian Military Doctrine and in the Fundamentals of State Policy in the Field of Nuclear Deterrence.

According to the documents, such a scenario is possible in the event of aggression against Russia or its allies with the use of weapons of mass destruction, or aggression with the use of conventional weapons, when the existence of the state itself is threatened.