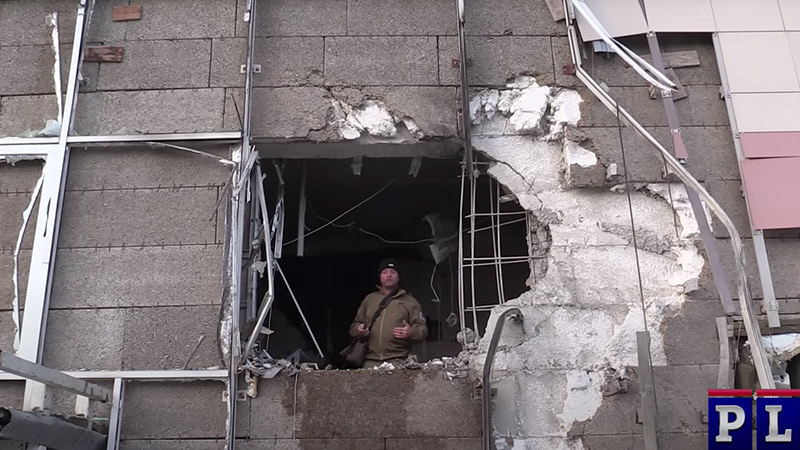 Independent journalist and U.S. military veteran Patrick Lancaster released a pair of reports over the weekend highlighting Ukraine’s bombings of a Russian town near the border of the two countries.

While Western media almost completely ignores the war crimes of Ukraine, they amplify every instance of Russia striking civilian infrastructure and have been caught fabricating events as well.

Infowars condemns the targeting of citizens by both sides of the conflict.

In his first report, Lancaster filmed from Murom, a town in the Belgorod region of Russia, a couple miles north of the Ukrainian border.

A school, church, kindergarten and cultural center were all hit and damaged by Ukrainian shelling.

The principal of a school that was struck by a missile called the strike “a terrorist act on the part of Ukraine.”

Meanwhile, when even mainstream media admits Russia strikes tactical sites such as power grids and not schools or churches, they call Russian soldiers the terrorists.

Next, Lancaster published a report exposing the Ukrainian shelling of a housing community for orphans.

In response to the bombardment, the town’s mayor ordered people to leave the community.

A local recreation center was also hit by a strike, causing shrapnel to rip into the walls and a portion of the roof to collapse.

A pair of local women described narrowly escaping being hit by the shelling of the sports recreation building.

Asked why Ukraine shells Russian citizens, one woman said it’s because they don’t like Russians and they want Russians to blame their own government and overthrow Putin.