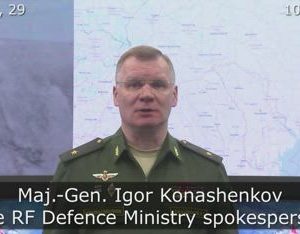 
✈️💥Operational-tactical and army aviation of the Russian Aerospace Forces have hit 22 military assets of Ukraine.

These include 5 platoon strong points, 13 areas of manpower and military equipment concentration, as well as 4 missile-artillery weapons and fuel depots in Severodonetsk, Chervonnoe and Belohorie.

💥Missile troops have hit 3 Ukrainian military assets during the day.

▫️The neutralised targets are 1 Buk-M1 anti-aircraft missile launcher near Adamovka and 1 Mi-24 helicopter of the Ukrainian Air Force near Chuguev.

▫️The attacks have resulted in the elimination over 200 nationalists and 32 armoured and vehicles of various purposes.

▫️During the day, 3 Ukrainian Tochka-U missiles over Izyum, Novaya Dmitrovka and Sukhaya Kamenka, as well as Smerch MLRS rockets near Topolskoe have been shot down in the air.

📊In total, 142 aircraft and 112 helicopters, 640 unmanned aerial vehicles, 279 anti-aircraft missile systems, 2,646 tanks and other armored combat vehicles, 305 multiple launch rocket systems, 1,184 field artillery and mortars, as well as 2,475 units of special military vehicles of the Armed Forces of Ukraine were destroyed during the operation.