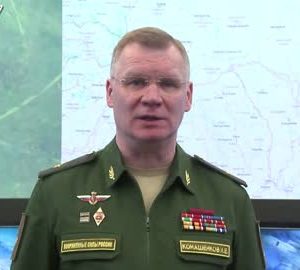 🏳️ The surrender of fighters from the Azov nationalist unit and Ukrainian servicemen blocked at the Azovstal plant in Mariupol began yesterday.
Over the past 24 hours, 265 militants have laid down arms and surrendered, including 51 seriously wounded. All those in need of medical assistance were sent for treatment to a hospital in Novoazovsk, Donetsk People’s Republic.

💥High-precision long-range sea-based Kalibr missiles near Starichi railway station in Lvov Region have destroyed the personnel of Ukrainian reserve formations, as well as shipments of foreign weapons and military equipment from the United States and European countries, prepared for shipment to Donbass.

💥High-precision air- and ground-based long-range missiles have destroyed enemy reserves that were completing their combat coordination at the training centers near Akhtyrka, Sumy Region, and Desna, Chernigov Region.

💥High-precision air-based missiles of the Russian Aerospace Forces have hit 2 command posts and 1 communications centre, including those of the 30th Mechanized Brigade near Bakhmut, 28 areas of AFU manpower and military equipment concentration, and 2 missile-artillery weapons and ammunition depots near Ugledar and Konstantinovka in Donetsk People’s Republic.

▫️The attacks have resulted in the elimination of more than 470 nationalists and up to 68 armoured and motor vehicles.

▫️In addition, 1 traction power substation have been destroyed near Merefa railway station in Kharkov region, which was delivering weapons and military equipment from the United States and Western countries to Donbass.

✈️💥Operational-tactical and army aviation have hit 9 command posts, 93 areas of AFU manpower and military equipment concentration, as well as 3 ammunition depots near Luparevo and Shevchenkovo in Nikolaev region.

▫️8 Smerch rockets have been intercepted near Chernobaevka, Kherson Region.

❗️I would like to stress that there are no units of Russian troops in Kherson. The Kiev regime is well informed about this. The strike was deliberately targeted at civilians in Kherson in retaliation for supporting the Russian Federation.