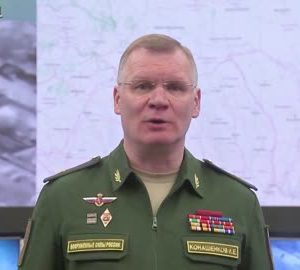 💥High-precision long-range sea-based Kalibr missiles near the Malin railway station in Zhytomir Region have destroyed a large batch of weapons and military equipment delivered from the USA and European countries for a grouping of Ukrainian troops in Donbass.

✈️💥Operational-tactical and army aviation have hit 4 command posts, 47 areas of AFU manpower and military equipment concentration, as well as 1 ammunition depot near Drobyshevo.

▫️The attacks have resulted in the elimination of more than 270 nationalists and up to 52 armoured and motor vehicles.

▫️Also, 1 Ukrainian Su-25 aircraft have been shot down by fighter aircraft during an aerial battle near Belitskoe, Donetsk Region.

💥Russian air defence means have shot down another Su-25 aircraft of the Ukrainian Air Force near Novoaleksandrovka, Kherson Region.

▫️In addition, 8 Ukrainian Smerch multiple-launch rockets have been shot down near Malaya Kamyshevakha, Kamenka, Brazhkovka in Kharkov Region and Chernobaevka in Kherson Region.