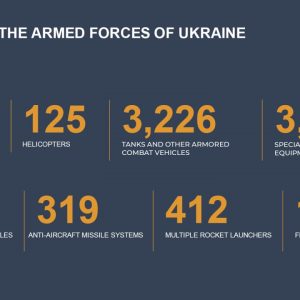 💥High-precision, long-range sea-based missiles near Malin railway station in Zhitomir Region have destroyed weapons and military equipment of the Ukrainian armed forces’ 10th Mountain Assault Brigade from Ivano-Frankovsk that had been transferred to Donbass.

💥High-precision air-based missiles have hit 4 command posts, 1 communication centre of the North Task Force near Bakhmut in the Donetsk People’s Republic, 48 areas of manpower and military equipment concentration, as well as 6 ammunition depots near Soledar, Sol’, Bakhmut, Berestovoe, Zakotoe and Nyrkovo in the Lugansk People’s Republic, during the day.

✈️💥Operational-tactical and army aviation have hit 39 areas of manpower and military equipment concentration and destroyed 1 ammunition depot near Krasnyi Liman in the Lugansk People’s Republic.

▫️The attacks have resulted in the elimination of more than 230 nationalists and up to 33 armoured and motor vehicles.

💥Missile troops and artillery have hit 73 command posts, 578 areas of AFU manpower and military equipment concentration, as well as 37 artillery and mortar units at firing positions.

🔹in Odessa, firing positions have been equipped in the buildings of schools No. 14 and No. 71, and armoured vehicles, artillery and MLRS have been placed in the surrounding area;

🔹in Kostantinovka, Donetsk People’s Republic, the Ukrainian Armed Forces have equipped strongholds, deployed artillery and MLRS weapons in School No. 1 and the administrative building and dormitory of Vocational School No. 39 and are holding residents of nearby houses in the premises of educational institutions under the pretext of ensuring security;

🔹in Gorskoe, Lugansk People’s Republic Ukrainian nationalists have equipped firing positions and ammunition depots on the lower and upper floors of apartment buildings on Gagarin Street.

❗️Local residents are forbidden to leave their flats, and all attempts by citizens to evacuate to safe areas are severely curtailed.


⚠️In Lisichansk, Lugansk People’s Republic, the Ukrainian Armed Forces have placed artillery and MLRS in the building and hangars of the rare gases plant, mined tanks with hazardous chemicals, and forcibly detained employees and local residents in the underground facilities.

▫️At the same time, the nationalists are systematically shelling positions of the Russian Armed Forces and Lugansk People’s Republic formations with MLRS, thus provoking them to retaliate in order to further accuse them of killing civilians and creating a man-made disaster in the city.

▫️In Putivl, Sumy Region, Ukrainian neo-Nazis have mined bridges across the Seim and Lyubka rivers, which they plan to blow up and accuse the Russian Armed Forces of allegedly indiscriminate strikes on vital civilian infrastructure in a well-known scenario.

▫️These facts once again demonstrate the Ukrainian authorities’ complete disregard for the norms of morality and the provisions of international humanitarian law. All this is happening with the tacit consent of the “Russophobe-influenced” countries of the so-called collective West, which continue to turn a blind eye to the numerous war crimes of the Kiev regime.

❗️We emphasize once again that in carrying out the tasks of the special military operation, the Armed Forces of the Russian Federation treat the local population extremely humanely and do not strike at civilian infrastructure facilities, unlike the Ukrainian armed formations.