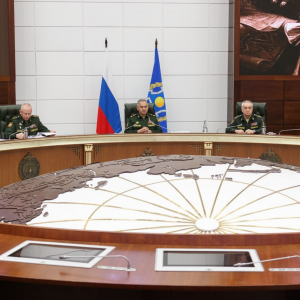 💥High-precision air-based missiles have hit 3 command posts, 36 areas of AFU manpower and military equipment concentration, 1 self-propelled artillery division of the 14th Mechanized Brigade near Soledar, as well as 6 ammunition depots in Minkovka, Bakhmut, Nikolaevka, Spornoe and Krasnyi Liman in the Donetsk People’s Republic, including 1 large depot of 155 mm shells for US M-777 howitzer in Razdolovka during the day.

▫️The attacks have resulted in the elimination of more than 210 nationalists and up to 31 armoured and motor vehicles.

💥Missile troops and artillery have hit 84 command posts, 463 areas of AFU manpower and military equipment concentration, as well as 137 artillery and mortar units at firing positions.


Minister of Defence of the Russian Federation, General of the Army Sergei Shoigu took part in a meeting of the Council of Defense Ministers of the Collective Security Treaty Organization.

▫️The meeting was held via teleconference.

During the meeting participants:

☑️ considered how to improve the crisis response system following the January (in 2022) CSTO peacekeeping operation in the Republic of Kazakhstan;

☑️ approved a number of documents to develop the organisation’s military component.


In addition to 🇷🇺Russian Defence Minister, the Defence Ministers of 🇦🇲Armenia, 🇧🇾Belarus, 🇰🇿Kazakhstan, 🇰🇬Kyrgyzstan and 🇹🇯Tajikistan, as well as CSTO Secretary General Stanislav Zas and Colonel General Anatoly Sidorov, the CSTO Chief of Joint Staff, participated in the meeting.

▫️Participants discussed the military-political situation in the CSTO area of responsibility, the situation in Ukraine and developed proposals to jointly counter challenges and threats to collective security.