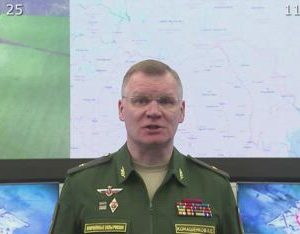 ▫️Demining and demilitarization of the seaport in the Donetsk People’s Republic’s Mariupol city, liberated from Ukrainian militants, has been completed and is now operating on a daily basis.

💥High-precision long-range air- and sea-based missiles in Zaporozhye have destroyed the production facilities of Motor Sich plant, which produced aircraft engines for combat aircraft of the Ukrainian Air Force, including UAVs.

▫️In addition, units of the Ukrainian Armed Forces reserve deployed to reinforce the grouping of Ukrainian troops in Donbass have been destroyed near Pokrovskoe railway station in Dnepropetrovsk Region.

💥High-precision air-based missiles have hit 3 command posts, including 1 command post of the 14th Mechanised Brigade and 1 communications hub in Vrubovka and Bakhmut, 1 AFU radio technical centre near Dneprovskoe, Nikolaev Region, 1 logistics centre of the 72nd Motorised Infantry Brigade near Soledar, 2 fuel bases in Kovyagin and Bezlyudovka, Kharkov Region, 2 air defence radar posts and military equipment at a storage base near Bakhmut, and 16 areas of AFU manpower and military equipment concentration, during the day.

✈️💥Operational-tactical and army aviation have hit 2 missile-artillery weapons and ammunition depots near Dolina in Kharkov Region and Posad-Pokrovskoe in Nikolaev Region, the territorial defence headquarters in Soledar and 46 areas of manpower and military equipment concentration.

▫️The attacks have resulted in the elimination of more than 300 nationalists and up to 46 armoured and motor vehicles.

💥Missile troops and artillery have hit 51 command posts, 385 areas of AFU manpower and military equipment concentration, as well as 53 artillery and mortar units at firing positions.