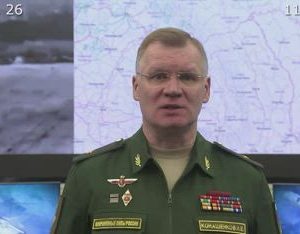 💥High-precision air-based missiles have hit 48 areas of AFU manpower and military equipment concentration, 2 artillery batteries, and 2 ammunition depots near Nikolaevka and Berestovoe in Donetsk People’s Republic during the day.

▫️1 Ukrainian electronic reconnaissance centre near Dneprovskoe, Nikolaev Region, has been destroyed, including 11 servicemen from the combat unit, as well as 15 foreign engineering specialists who arrived with security guards.

✈️💥Operational-tactical and army aviation have hit 49 areas of AFU manpower and military equipment concentration, 2 mortar crews, as well as 1 depot of missile and artillery weapons and ammunition.

▫️The attacks have resulted in the elimination of more than 350 nationalists and up to 96 armoured and motor vehicles.

▫️Units and military equipment of the Ukrainian Armed Forces’ 10th Mountain Assault Brigade, which arrived to reinforce the Ukrainian grouping in Donbass, have been destroyed during unloading near Pokrovsk railway station in Donetsk People’s Republic.