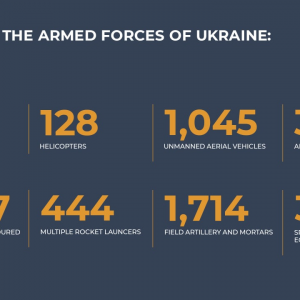 ▫️As a result of joint action by People’s Militia of Donetsk People’s Republic and the Russian Armed Forces, Krasnyi Liman has been completely liberated from Ukrainian nationalists.

💥High-precision air-based missiles of the Russian Aerospace Forces have destroyed the forward comand post of the 30th mechanized brigade of the AFU in Bakhmut and command post of the territorial defence brigade in Soledar.

▫️In addition, 5 command and observation posts, 17 areas of Ukrainian military manpower and military equipment concentration, and 4 ammunition depots near Nyrkovo, Bakhmut and Mironovka of the Donetsk People’s Republic have been hit.

▫️The attacks have resulted in the elimination of more than 260 nationalists.

▫️In addition, 1 Ukrainian Tochka-U ballistic missile have been intercepted near Svatovo, Lugansk Region, and 7 Smerch rockets have been shot down near Sukhaya Kamenka, Kharkov Region, and Golaya Pristan, Kherson Region.