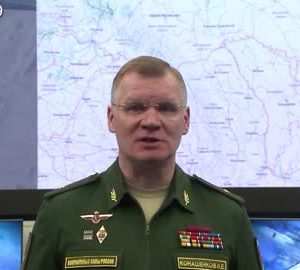 💥High-precision long-range missiles of the Russian Aerospace Forces have destroyed a large arsenal of the Ukrainian Armed Forces at an enterprise’s storage site in Krivoi Rog, Dnipropetrovsk Region.

✈️💥 Operational-tactical, army and unmanned aviation have hit 2 command posts, as well as 53 areas of concentration of AFU manpower and military equipment.

▫️The attacks have resulted in the elimination of more than 300 nationalists and up to 50 AFU military and special equipment.

💥Russian air defence means have shot down 1 Su-25 aircraft of the Ukrainian air force near Novogrigorovka, Dnepropetrovsk Region, in mid-air.

💥Missile troops and artillery have hit 62 command posts, 596 areas of manpower and military equipment concentration, as well as 52 positions of artillery and mortar units of Ukrainian nationalists.