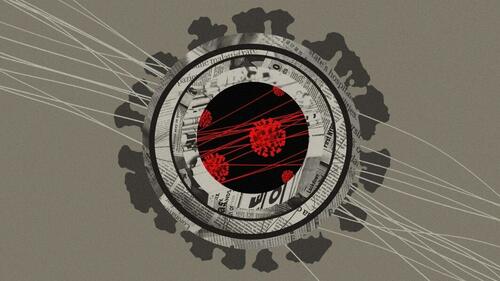 First, that lobbyists for the pharmaceutical industry launched a ‘massive lobbying blitz to crush any effort to share patents/IP for new covid-related medicine,” according to The Intercept‘s Lee Fang. As part of this effort, lobbying group BIO “wrote to the newly elected Biden admin, demanding the U.S. gov sanction any country attempting to violate patent rights and create generic low cost covid medicine or vaccines.“

Of note, Pfizer and BioNTech raked in $37 billion in revenue in 2021 alone from the COVID-19 vaccine, while Moderna made $17.7 billion the same year (and has recently announced a plan to hike the price of the Covid-19 vaccine by approximately 400%).

BioNTech, which developed the Pfizer vaccine, “reached out to Twitter to request that Twitter directly censor users tweeting at them to ask for generic low cost vaccines.“

5. That brings us to Twitter. The global lobbying blitz includes direct pressure on social media. BioNTech, which developed Pfizer's vaccine, reached out to Twitter to request that Twitter directly censor users tweeting at them to ask for generic low cost vaccines. pic.twitter.com/6cVIRcUDZV

According to Fang, “Twitter’s reps responded quickly to the pharma request,” while “A lobbyist in Europe asked the content moderation team to monitor the accounts of Pfizer, AstraZeneca & of activist hashtags like #peoplesvaccine.”

Meanwhile, the “fake accounts” flagged by the pharmaceutical companies for action were real people – one of whom Fang spoke with on the phone.

8. It's not clear what actions Twitter ultimately took on this particular request. Several Twitter employees noted in subsequent messages that none of this activism constituted abuse. But the company continued monitoring tweets.

“For more than two years, a global movement has been speaking out against pharmaceutical greed and demanding that everyone, everywhere has the tools to combat pandemics,” said Maaza Seyoum, a campaigner for the People’s Vaccine Alliance. “Whatever nasty tricks companies and governments pull,” she continued, “we cannot and will not be silenced.”

BIO funded the PGP campaign, “Stronger,”  to the tune of $1.275 million. Its focus? Helping Twitter ‘create content moderation bots,’ selecting which public health accounts would be verified, and helping to crowdsource content takedowns.

Of note, the Moderna/Pfizer-funded campaign included regular emails to Twitter officals with takedown and verification requests.

“Here’s an example of those types of emails that went straight to Twitter’s lobbyists and content moderators. Many focused on @zerohedge, which was suspended.“

12. The Moderna/Pfizer-funded campaign included direct regular emails with lists of tweets to takedown & others to verify. Here's an example of those types of emails that went straight to Twitter's lobbyists and content moderators. Many focused on @zerohedge, which was suspended. pic.twitter.com/wNPPx1IiRD

From Fang’s Intercept piece, below is one of the flagged tweets in question – which links to a ZeroHedge article aggregated from NakedCapitalism, and which logically posits; “if a vaccinated person and an unvaccinated person have roughly the same capacity to carry, shed and transmit the virus, particularly in its Delta form, what difference does implementing a vaccination passport actually make to the spread of the virus?”

"if a vaccinated person and an unvaccinated person have roughly the same capacity to carry, shed and transmit the virus, particularly in its Delta form, what difference does implementing a vaccination passport actually make to the spread of the virus?"https://t.co/HNiND8uInP

“To try and stifle digital dissent during a pandemic, when tweets and emails are some of the only forms of protest available to those locked in their homes, is deeply sinister,” said Nick Dearden, director of Global Justice Now.

More on one of the people behind this effort, courtesy of Twitter user @TexasLindsay_

1. So, who censored @zerohedge?
A woman who is deeply entangled with government agencies working at what one could arguable call a front organization funded by Big Pharma and fueled by government interests. #TwitterFiles https://t.co/lUYuflP3ti

3. So what does Knell do exactly? On LinkedIn, she claims to lead PGP’s partnership strategy development & execution—working with “The Rockefeller Foundation, CDC Foundation, UNICEF, Yale Institute of Global Health, Meta, & more.” pic.twitter.com/3eNMm2Jinn

“To translate the above into layman’s terms she is a narrative enforcer. She’s funded by Big Pharma and aided by Big Brother to be the ministry of truth. She aims to create social norms by means of censorship and propaganda. She wants to tell you & I—how/what to say and think.“

Meanwhile, as this bullying progressed this was happening…

*PFIZER JUMPS AS MUCH AS 6.8% TO RECORD DEFYING MARKET ROUT

Finally, as this latest ‘Twitter Files’ thread spreads across a holiday market, Elon Musk himself has opined on the efforts to bully the former Twitter executives into censoring ZeroHedge:

I’ve long followed and appreciated @zerohedge for of its irreverent market analysis. I never understood why it was censored — until now. It was at the behest of Big Pharma. https://t.co/AkYfzLGXL2

We’ll take the ‘being jerks’ jab… isn’t that what the media is supposed to be?