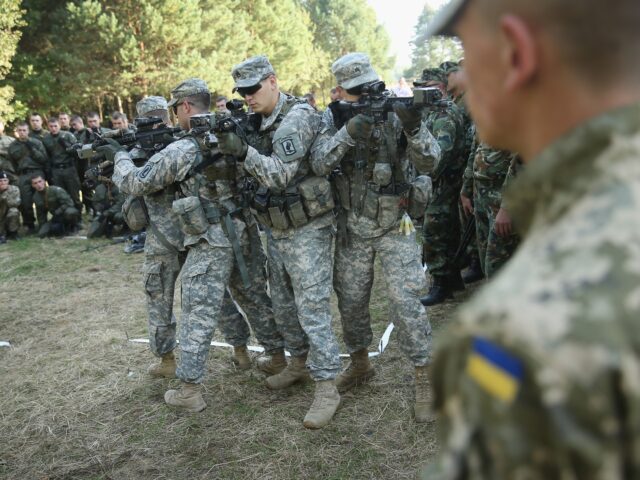 United States Military personnel have been deployed to Ukraine to, it is claimed, keep track of weaponry and ammunition supplied at the expense of the American taxpayer, the Pentagon says.

In order to alleviate concerns that American military equipment will end up on the black market, a U.S. “defence attaché” of military personnel has been sent under the command of Brig. Gen. Garrick Harmon to conduct arms inspections of weaponry supplied to the Ukrainians.

The military operation, which is being conducted alongside the Office of Defense Cooperation operating out of the U.S. Embassy in Ukraine, will also seek to bolster the ability of Kyiv (Kiev) to set up border checks for weapons smugglers, step up training for Ukrainian inspectors and guards, as well as providing training on how to properly dispose or destroy weapons and munitions.

Speaking at a no-names Pentagon briefing, the transcript of which has been published, a “senior defense official” said “There have been several of these inspections”.

Describing the “proactive steps” taken to keep American arms out of the hands of smugglers and criminals in Ukraine — emphasising the Department of Defence had not yet seen evidence of equipment being “diverted” — the unnamed official said “ensuring accountability of advanced weapons donations is a top priority”.

Confirming that U.S. forces were officially deployed inside Ukraine, the unnamed official said: “U.S. personnel have recently resumed on-site inspections to assess weapon stocks in country whenever and wherever the security conditions allow. The return of our defense attaché and Office of Defense Cooperation personnel in country has allowed us to resume this critical function.”

American troops officially left Ukraine on February 14th, ten days before the full-scale invasion of the country by the Russian military, in order to prevent potential conflict between the world’s two largest nuclear powers.

However, while American military personnel have not been acknowledged to have been operating in the country until now, intelligence operatives from the CIA have allegedly been on the ground to provide training as well as logistical support to the Ukrainians, the New York Times reported in July. The paper went on to claim that a “few dozen commandos” from NATO nations, including Britain, Canada, France, and Lithuania were also still operating in the country.

In April, Pentagon Press Secretary John F. Kirby also revealed that the United States Armed Forces were actively training Ukrainian soldiers “in Germany and at other locations in Europe“.

Yet, the 79-year-old Democrat later caused controversy when he supposedly misspoke during a March address to soldiers stationed in the Polish city of Rzeszow. Suggesting they would be going to Ukraine, Mr Biden said: “You’re going to see, when you’re there, and some of you have been there, you’re going to see women, young people, standing in front of a damn tank.”

The White House was later forced to walk back the statement, claiming that the president meant soldiers interacting with Ukrainians in Poland.

The revelation report that American troops are operating in Ukraine comes as the Biden administration is said to be preparing another $50 billion aid package to Ukraine. Since the February invasion, the American government has so far approved  $65 billion in aid to the country.

UK Govt Helping Ukraine 'Rebuild Its Forces' by Training Up to 10,000 Recruits in Britain https://t.co/AqE74cO9ee