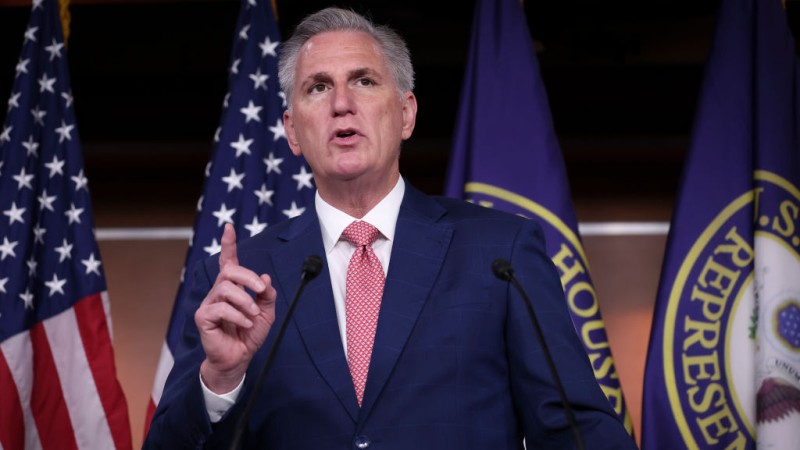 From The Telegraph, “Kevin McCarthy ‘agreed to cut aid to Ukraine’ to secure US speaker role”:

Kevin McCarthy reportedly agreed to spending caps that would limit future aid to Ukraine as part of the deal with ultraconservatives that enabled him to finally be elected as House speaker on Saturday.

Mr McCarthy, a Republican, secured the position in the early hours, following a historic five-day 15-vote fight that brought Washington to a standstill.

His Right-wing opponents from the chamber’s Freedom Caucus, dubbed the “Taliban 20”, wielded their opposition to US aid for Kyiv as part of their justification for voting against him in the first 14 votes.

Representative Matt Gaetz of Florida, one of the most hardline aid sceptics, led the charge against Mr McCarthy’s candidacy for speaker before eventually yielding after an extraordinary confrontation in the chamber.

Seeing as how the Taliban defeated the US empire in Afghanistan, I guess Gaetz et al. should take that as a compliment.

According to reports, to end the impasse, Mr McCarthy agreed [to] a deal that the House would commit to passing bills that would cap all discretionary defence spending at 2022 financial year levels, meaning roughly $1.47 trillion. Congress has passed four emergency supplementals totalling more than $100 billion since Russia’s invasion in February.

All that $100+ billion went to Ukraine, in case the wording there wasn’t clear.

President Joe Biden will require Congress to approve any additional military aid later this year. Should one of the rebel lawmakers – who have vowed to oppose any further aid packages – be given leadership roles in the House Rules Committee it could create immense hurdles to passing additional assistance legislation.

The most recent $45 billion package agreed by Congress will not be affected by the new House leadership.

“Haemorrhaging billions in taxpayer dollars for Ukraine while our country is in crisis is the definition of America last,” Mr Gaetz said last month as to why he had stood against Mr McCarthy.

Matt Rosendale of Montana, another holdout, recently voted against US support for Ukraine, citing what he said were more pressing security needs along the southern border with Mexico.

“This is a harbinger for a protracted legislative paralysis,” one diplomat warned, telling CNN that “the Freedom Caucus – which is not particularly pro-Ukrainian – has just demonstrated its clout.”

Congratulations to @GOPLeader on his election as the Speaker of 🇺🇸 House of Representatives. U.S. support in all fields has been vital for 🇺🇦’s success on the battlefield. We’re counting on your continued support and further U.S. assistance to bring our common victory closer.

Zelensky also thanked the US and Joe Biden for “the new weaponry” and billions of dollars they sent to drag out the war.

Russian president Vladimir Putin proposed a “Christmas truce” for Orthodox Christmas starting at noon on January 6 until midnight on January 7 which the Zelensky regime rejected immediately by shelling Donetsk.