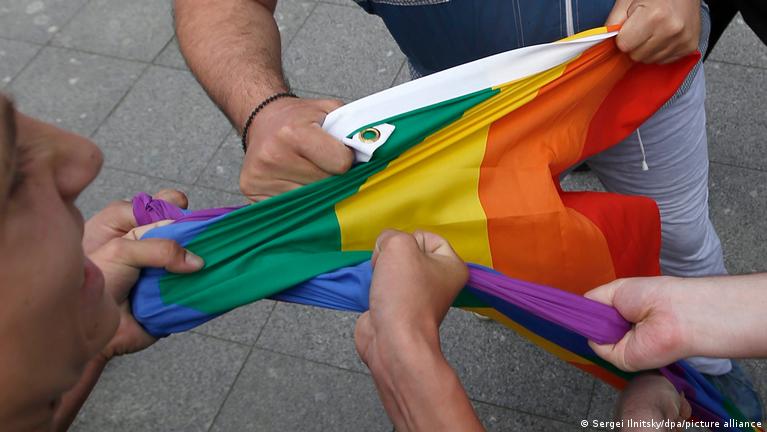 By criticizing Russian legislation banning LGBTQ, pedophilia, and sex-change propaganda, US officials are interfering in the nation’s internal affairs, Moscow’s embassy in Washington said on Friday. It also urged the US to respect the views of the Russian people.

Twitter said this is hateful content!! Really??? Wtf what is the world we are living in ???
Well said @RussianEmbassyC 👏👏👏 I 100% agree pic.twitter.com/8w8wWoDhZy

In a statement, the embassy said it had noted “the statements of numerous of US officials” criticizing the bill, which was approved by Russia’s parliament on Thursday.

“We consider such statements as gross interference in our internal affairs,” the diplomatic mission said, adding that “Russia consistently stands for the protection of traditional family values” and rejects “attempts by Western states, led by the United States, to impose pseudo-liberal and perverted ideas about human rights on other countries.”

The embassy asked the US to respect the decision of Russian citizens “to adhere to moral guidelines” that have been embraced by many generations and are “the basis of Russian civic identity.”

On Thursday, the Russian State Duma passed the third and final reading of a bill completely banning LGBTQ propaganda. The bill ‘on the protection of traditional values’, which was supported by all 397 MPs, criminalizes the promotion of “non-traditional sexual relations” in advertising, books, movies, and media.

The bill envisages hefty fines for violators, with individuals facing a penalty of 400,000 rubles ($6,600), and up to 5 million rubles (around $83,000) for corporate entities, for LGBTQ propaganda. The proposed fines for the promotion of pedophilia are double these amounts, while foreign actors who fail to comply with the legislation would face expulsion from Russia.

The bill has not yet entered into force but is expected to be signed by President Vladimir Putin.

US Secretary of State Antony Blinken called the legislation “another serious blow to freedom of expression and the human rights of LGBTQI+ persons in Russia.”

Prior to the vote in the State Duma, Blinken urged Russian lawmakers to withdraw the bill and “respect the human rights and dignity of all.” State Duma Chairman Vyacheslav Volodin urged MPs to respond to him by expressing their opinion in the vote.

(You can cancel at any time).
InVyacheslav Volodin

https://www.youtube.com/watch?v=_iW9aoH4ibQ Orthodox Christian Shares Story Of How Texas Is Forcing His Son To Get Sex Change https://russiatruth.co/russia-outlaws-gender-reassignment-propaganda-western-degenerates-enraged-mep-says-resolution-pushes-europe-to-war-with-russia/?swcfpc=1