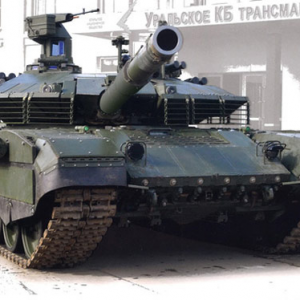 Russia has sent a train of its latest T-90M “Proryv” tanks to troops stationed in Ukraine, according to the newspaper Izvestia.

The newspaper reported that Uralvagonzavod, a Russian company considered to be the world’s largest battle tank manufacturer, has provided “a solemn dispatch of an echelon of T-90M Proryv tanks to the Russian Ministry of Defense.”

The news was also reported by RIA Novosti, Russia’s state-owned domestic news agency. The story was among the most popular on RIA Novosti’s website for the day.


The tanks were put on a train and sent off to the front to the tune of “Farewell of the Slav,” a Russian patriotic march written for the Slavic women who accompanied their husbands in the First Balkan war in 1912. The tanks were blessed by the ​​rector of the church of Dimitry Donskoy, Archpriest John Bragin, in what was described as a “solemn ceremony” by RIA Novosti.

The news agency also reported that drawings and letters from the children of Uralvagonzavod’s workers were put into the tanks as “symbols of our support for Russian soldiers, a sign of respect and faith in their courage.”

Uralvagonzavod, which is based in Nizhny Tagil in the Sverdlovsk Oblast, is part of Rostec, a state-owned defense conglomerate.

The T-90M tank reportedly sent to the Ukrainian front is a model developed by the Ural Design Bureau of Transport Engineering and is considered the most advanced version of the T-90 family of tanks.

RIA Novosti wrote that it is the “most adapted to the actions in the conditions of modern combat.” According to the news agency, the T-90M is able to exchange data with other machines in real time.