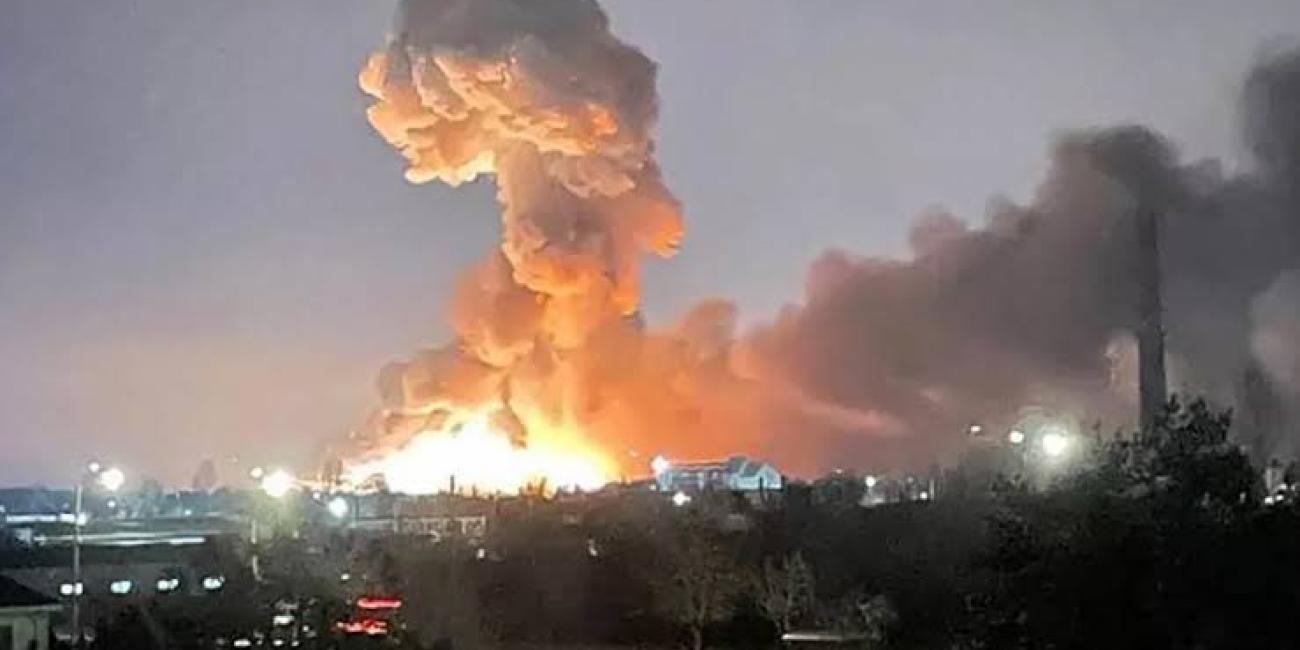 A series of major explosions rocked Kyiv and several locations across Ukraine on Monday, following Russian President Vladimir Putin blaming Ukrainian special services for the “terrorist” blast which partially disabled the Crimean bridge that links Russia to the peninsula.

Ukrainian President Volodymyr Zelensky confirmed the fresh missile attacks in a statement posted to Telegram, saying that the new “missiles hitting” are part of the Kremlin trying to “wipe us off the face of the Earth,” and that: “Unfortunately, there are dead and wounded.”

At least 100 strikes were carried out, with many cruise missiles launched from Russian warships in the Black Sea. Putin in a televised announcement said he ordered attacks on military, energy, and communications targets specifically in response to the Crimea bridge attack.

“If attempts to carry out terrorist attacks continue, Russia’s response will be severe and at the level of the threats facing it. Nobody should be in any doubt,” Putin warned. He threatened that more might follow: “If attempts to commit terrorist acts on our territory continue, the responses from Russia will be harsh and their scale will correspond to the level of threat to Russia,” he added, addressing a meeting of his Security Council. “No one should have any doubts.”

Russia’s defense ministry also affirmed it hit “all the assigned targets” – which in some cases appear to have been civilian infrastructure in the Ukrainian capital. Regional sources are listing that over 15 significant cities were targeted and suffered severe damage, including Kiev, Rovno, Lvov, Ternopol, Ivano-Frankovsk, Khmelnitsky, Zhitomir, Kremenchug, Kropivnitsky, Krivoy-Rog, Odessa, Zaporozhie, Dnieper, Poltava, Kharkov. Additional smaller cities and towns were hit as well.

Over 50+ missile strikes have been reported in Ukrainian cities. Misty cruise missiles such as Kh-101 and Kalibr. Chaos ensues and woman can be heard screaming in the background pic.twitter.com/BWUpKbS33m

Kyrylo Tymoshenko, deputy head of the Ukrainian presidency’s office said “many cities” came under Russian attack. “Ukraine is under missile attack. There is information about strikes in many cities of our country.” He further warned the population to “stay in shelters.”

Kyrylo Tymoshenko, deputy head of the Ukrainian presidency’s office said “many cities” came under Russian attack. “Ukraine is under missile attack. There is information about strikes in many cities of our country.” He further warned the population to “stay in shelters.”

“The capital is under Russian terrorists’ attack!” Kyiv mayor Vitali Klitschko said in describing strikes on the city center. “If there is no urgent need, it is better not to go to the city today. I am also asking the residents of the suburbs about this — do not go to the capital today.”

Importantly, there are reports the building housing the German consulate in Kyiv was rocked by a missile, according to BILD newspaper. These are the first strikes on the Ukrainian capital since June.

Metro station in Kyiv where I am with my son now. Very crowded, lots of kids. People are calm, no panic. pic.twitter.com/IFkeresRsW

In an initial response EU foreign policy chief Joseph Borrell said he is “Deeply shocked by Russia’s attacks on civilians in Kyiv and other cities in Ukraine. Such acts have no place in 21st century,” and condemned them “in the strongest possible terms.”

However, Russian Security Council Deputy Chairman Dmitry Medvedev said this is only the beginning of the response, saying according to a state media translation:

“The first episode is over. There will be others… I will express my personal position… The Ukrainian state in its current configuration with the Nazi political regime will pose a constant, direct and clear threat to Russia. Therefore, in addition to protecting our people and protecting the country’s borders, the goal of our future actions … should be a complete dismantling of the political regime of Ukraine,” Medvedev wrote on his Telegram channel.

Many pundits have pointed out that Russia has been “holding back” up to this point. With the war now more than seven months in, there hasn’t been the kind of “shock and awe” attacks against major Ukrainian centers like some predicted initially.

Understand this, Putin is holding back in Kiev #Kyiv pic.twitter.com/mdPTqzaPg6

Independent geopolitical analyst Tom Fowdy described, “I honestly don’t know what Ukraine and their supporters were expecting when they decided to attack a bridge Russia could not have made more clear was a massive, massive red line. They’re forcing Putin’s hand even when he has been massively lethargic to play it.”

From a friend in Kyiv this morning. pic.twitter.com/szsRVLxedG

Likely reports of casualty figures will continue rising throughout the day as damage is assessed. “At least five civilian deaths were reported and 12 people were wounded in Kyiv on Monday as at least 83 missiles were fired on the country,” The Hill reports based on local sources. Ukraine’s armed forces said that air defenses succeeded in downing 43 missiles.