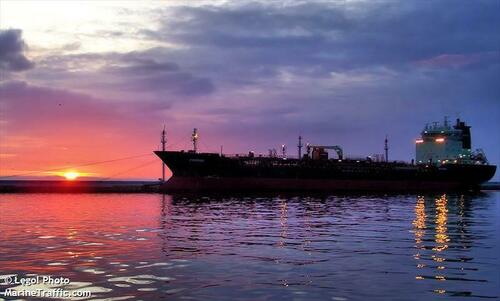 In an effort to dull the effect of international restrictions on its oil sales, Russia has discretely assembled a “shadow fleet” of more than 100 tankers, according to shipping brokers and industry analysts who spoke to the Financial Times.

The largely anonymous tanker purchases can be tracked by the big increase in unnamed or new buyers appearing in registries. The vessels are generally 12-15 years old and would be expected to be scrapped in the next few years, said Anoop Singh, head of tanker research at Braemar. — Financial Times

“We’ve seen quite a number of sales to unnamed buyers in recent months, and a few weeks after the sale many of these tankers pop up in Russia to take their first load of crude,” Craig Kennedy at Harvard’s Davis Center for Russian and Eurasian Studies told the Times.

The report comes as new Ukraine War-inspired Russian oil restrictions are poised to take effect. On Monday, a long-planned EU ban on seaborne oil imports from Russia will take effect. In mid-February, the import ban will extend to refined Russian products.

This week, the G-7 (Canada, France, Germany, Italy, Japan, the U.K. and the U.S.) and the EU agreed to cap the price of Russian crude oil at $60 a barrel. The cap will be subject to adjustments every two months, starting in mid-January.

Of course, since the EU won’t be importing Russian oil starting on Monday, the scheme targets Russia’s global oil trade, which relies heavily on Western companies.

Specifically, the price cap will bar Western businesses from insuring, financing or shipping Russian oil unless the price is at or under the cap. In this context, one particularly noteworthy Western company is maritime insurer Lloyd’s of London.

Russia has said it won’t do business with any countries that enforce the price cap.

“We have no interest in what the price cap will be. We will reach direct agreements with our partners. The partners working with us will disregard these caps and will give no guarantees to those who impose such caps illegally,” said Russian Foreign Minister Sergey Lavrov at a Dec.1 press conference.

With its growing fleet of aging, bargain-bin tankers, Russia is looking to bolster its exports to China, India, Turkey and other countries that have greatly boosted their purchases of Russian oil as other countries reduce them.

According to Braemar’s analysis, Russian operators appear to have acquired: