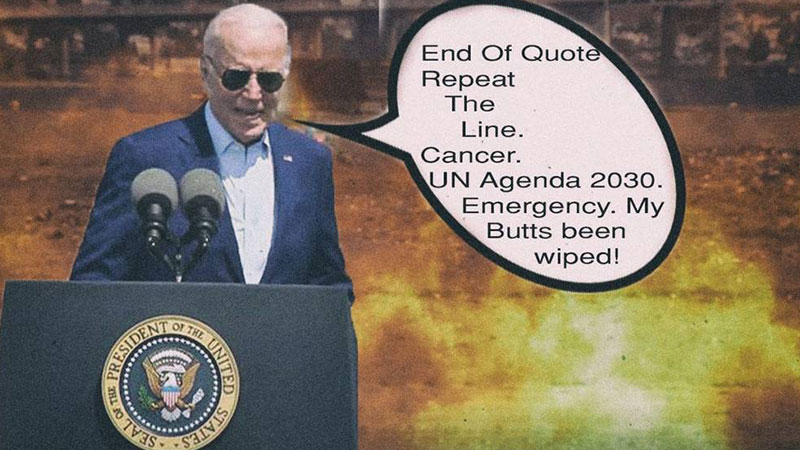 Speaking from Somerset, Massachusetts, the United Nations Agenda 2030 puppet Joe Biden signaled he would soon grant himself illegal Climate Change Emergency powers that could bring a screeching halt to U.S. exports of crude oil and eliminate offshore drilling, ushering in the very real possibility of converting military funding into the construction of renewable energy projects.

To ratchet up the fear and confuse the public into assuming all is well with the globalist’s build back better calamity. UN Agenda 2030 salesman Joe Biden made many claims that simply aren’t true.

On top of confusing misleading rambling that lead many to wonder if the sitting President had cancer, disaster Joe has stepped in it again.

How can you tell that The United Nations Agenda 2030 has already gone off the rails? In the United Nations declaration for Agenda 2030 the authors immediately declare that they “…recognize that eradicating poverty in all its forms and dimensions, including extreme poverty is the greatest global challenge. “ Yet the power grab disguised as a green energy revolution has already plunged Europe’s economy into chaos. Extreme global poverty and mass starvation is the United Nations goal and the world is responding.

But don’t count the Joe Biden’s globalist puppet masters out. If you take the time to actually research the writings of the architects of global governance. The United Nations Agenda 2030 debacle that is well underway is nothing short of a psychotic power grab by the emerging technocrat eugenicists posing as our saviors. Dismantling the global economy piece by piece inching towards neo feudal insanity.