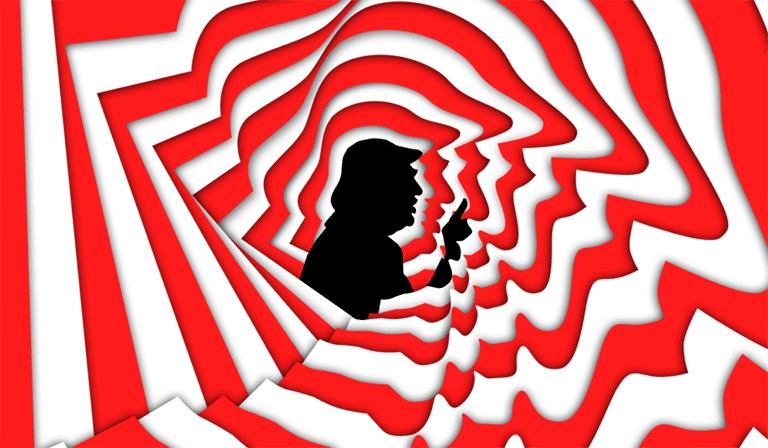 “Their weaponization of law enforcement, intelligence agencies, and the Deep State is very, in fact, deep seated,” says former president.

Former President Donald Trump issued a statement Wednesday calling Joe Biden’s regime “the most corrupt in American history,” breaking down the Deep State’s and media’s subversion of the democratic process and theft of the 2020 election.

Trump said the new Republican-led committee into the weaponization of government against the people has a chance to “expose the breathtaking corruption” of the “security state, the media, and the Washington swamp.”

Trump said the committees could get to the bottom of the Russia collusion witch hunt, the impeachment hoaxes, the Hunter Biden laptop, clandestine FBI involvement in January 6, 2021, the censorship coordination between the federal government and Big Tech companies preceding the 2020 election, and much more.

Trump summed up by declaring that “Joe Biden is presiding over the most corrupt Administration in American history. Their weaponization of law enforcement, intelligence agencies, and the Deep State is very, in fact, deep seated. It’s the greatest threat American freedom in generations has seen. And their collusion with the fake news media is absolutely atrocious.”

Update: Donald Trump responded to Meta announcing he can return to its Facebook and Instagram platforms by noting the company “lost billions of dollars in value” after de-platforming him over two years ago.

He also said a sitting president should never again be censored by Big Tech and thanked his Truth Social platform for its growth and potential.

Suddenly claiming to support “open debate and the free flow of ideas,” the Meta press release explained the company doesn’t “want to get in the way of open, public and democratic debate on Meta’s platforms — especially in the context of elections.”

Trump’s account was banned over two years ago in response to claims by the media that he encouraged his supporters to go into the Capitol on January 6th.

The company said it listened to “expert assessments on the current security environment” in America and decided the “risk to public safety” that comes with Trump being reinstated on Facebook or Instagram has sufficiently receded.

Could these “expert” opinions have come from intelligence officials as we saw with Twitter’s collaboration with the federal government revealed in the Twitter Files?

Explaining the short leash Trump will be given if he chooses to return to the platforms, Meta stated, “In the event that Mr. Trump posts further violating content, the content will be removed and he will be suspended for between one month and two years, depending on the severity of the violation.”

Trump would also be barred from sharing “content that delegitimizes an upcoming election or is related to QAnon,” according to the Big Tech company.

In a bizarre inversion of reality, the statement continued to allege Meta supports “letting people speak, even when what they have to say is distasteful or factually wrong.”

This could signal a turning of the tide regarding online censorship after Elon Musk’s release of the Twitter Files gave the public a glimpse into the incestual relationship between intelligence agencies and Big Tech.

https://www.youtube.com/watch?v=YlKm7PeNyKA&list=LL&index=4 Lavrov: the key principle of the UN - the sovereign equality of states is grossly violated and ignored by...

Ukrainian "anti-oligarch" President Volodymyr Zelensky and his inner circle's network of offshore companies were not exposed in Panama Papers but can be...

The West has prepared a "Russia after Putin" plan and already chose its actors in the face of Garry Kasparov*...

https://www.youtube.com/watch?v=Pg0ScJ7vXe4 A dozen officials in Ukraine have resigned in a large-scale corruption scandal that involved politicians accused of all number...

https://www.youtube.com/watch?v=RnjlwEfCXPg A ruckus erupted at the Australian Open after fans waved Russian flags following a match between Serbia's Novak Djokovic...

https://www.youtube.com/watch?v=JxPU2XH_Cq8 Right now Sergey Lavrov is making his second African tour in the last year. The first country he visited...