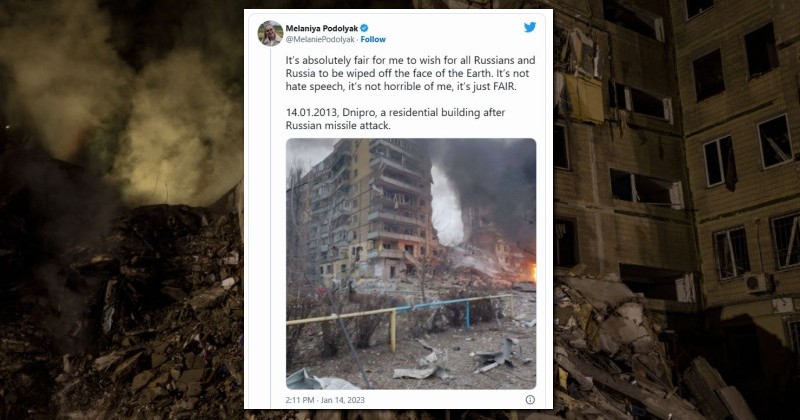 A Ukrainian activist who has been lauded by legacy media outlets called for “all Russians” to be “wiped off the face of the Earth.”

The genocidal remarks were made by blogger Melania Podoliak in response to a missile hitting an apartment block in the Ukrainian city of Dnepr.

The building was struck after a Russian missile was shot down by a Ukrainian anti-air weapon, according to Aleksey Arestovich, an adviser to President Vladimir Zelensky.

“It’s absolutely fair for me to wish for all Russians and Russia to be wiped off the face of the Earth,” Podoliak tweeted.

“It’s not hate speech, it’s not horrible of me, it’s just FAIR,” she added.

It’s absolutely fair for me to wish for all Russians and Russia to be wiped off the face of the Earth. It’s not hate speech, it’s not horrible of me, it’s just FAIR.

Quite how it was “fair” for all Russians to be killed in response to their government being embroiled in a war wasn’t explained by Podoliak.

Her comments were flagged after it was noted that Podoliak has been given a platform by numerous western legacy media outlets, including on NBC News as a “political activist” and by Fox News as a “media consultant.”

Critics accused Podoliak of being “pro-ethnic cleansing,” to which she responded by tweeting swear words.

After some respondents said they knew Podoliak’s home address, she told them they were in for “a big fucking treat,” posting a photo of herself holding a shotgun.

Cool, now these bots threaten me by letting me know they have my address

Well if you know that, you also know your in for a big fucking treat. Cya!

(Unless you want to waste an entire missile on me, which is going to change nothing for you, you’re still gonna get fuucked) https://t.co/4iesIszNGw pic.twitter.com/EbRkD8krPp

This isn’t the first time we’ve heard such genocidal rhetoric.

As we previously highlighted, Ukrainian TV host Fahruddin Sharafmal took to the airwaves to demand the genocide of Russian children, quoting top Nazi Adolf Eichmann as he called for “killing children.”

Source: Ukrainian Activist Lauded by Western Media Says She Wants “All Russians” to be “Wiped Off the Face of the Earth” – Summit News

(You can cancel at any time).
InMelania Podoliak, Paul Joseph Watson, Summit.news