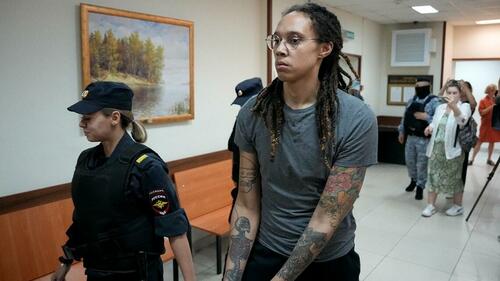 The White House is livid after WNBA star Brittney Griner has been transferred to a forced labor colony to serve out a nine-and-a-half year sentence after her conviction for possession of a small quantity of cannibas oil.

Griner “is now on her way to a penal colony,” her attorneys said in a Wednesday statement, noting that “we do not have any information on her exact current location or her final destination.” The lawyers said they won’t know of her precise whereabouts for possibly two weeks. “In accordance with the standard Russian procedure, the attorneys, as well as the US Embassy, should be notified upon her arrival at her destination. Notification is given via official mail and normally takes up to two weeks to be received.”

Though Griner’s move to the penal colony is just now being confirmed, her legal team said she was transferred out of the detention center where she was held for court appearances on Nov.4.

It could be that over the last number of days Washington was desperately trying to reach a deal with the Russian government, given the idea of a prisoner swap has long been on the table.

The AFP reported the Biden administration’s outraged and frustrated reaction as follows:

Griner’s case has drawn outrage in the United States, with Secretary of State Antony Blinken reaching out to Russia to propose a deal to free her despite soaring tensions over Moscow’s invasion of Ukraine.

White House Press Secretary Karine Jean-Pierre reiterated that the United States had put forward a “substantial offer” to Russia to resolve her case.

“Every minute that Brittney Griner must endure wrongful detention in Russia is a minute too long,” Jean-Pierre said.

“As the administration continues to work tirelessly to secure her release, the president has directed the administration to prevail on her Russian captors to improve her treatment and the conditions she may be forced to endure in a penal colony.”

While the specifics of any impending deal on the table are unknown at this point, recent widespread reporting has alluded to a trade for convicted Russian arms trafficker Viktor Bout, who is serving 25 years in prison for a 2012 conviction in a US federal prison. There’s been talk that jailed former Marine Paul Whelan, also serving a lengthy term in Russian prison, could be part of the potential exchange.

A recent story in Vice collected some first-hand accounts of what Russian forced labor camps are like, some excerpts of which follow…

Toloknnikova, convicted in 2012 of “hooliganism motivated by religious hatred,” for performing one of their songs at a cathedral in Moscow, recalled 16-hour days working in sewing shops on broken machines for pennies a month, grossly underequipped “hygiene rooms” often rendered useless by faulty plumbing, and hundreds of prisoners queuing up to use the handful of showers available.

…Both Toloknnikova and Navalny also spoke of rampant corruption, violence from guards and prisoners, and a general sense of fear among inmates.

The poor conditions are a hangover from the gulags, or criminal detention camps that existed in the days of the Soviet Union, according to Kareniauskaite.

…Penal colonies are typically located hundreds of kilometers from the nearest city, an infrastructural holdover of imperial Russia, when exile was synonymous with serious punishment from the government. As a result, many of these abuses are difficult for local activists to monitor, according to Russian prison sociologist Olga Zeveleva.