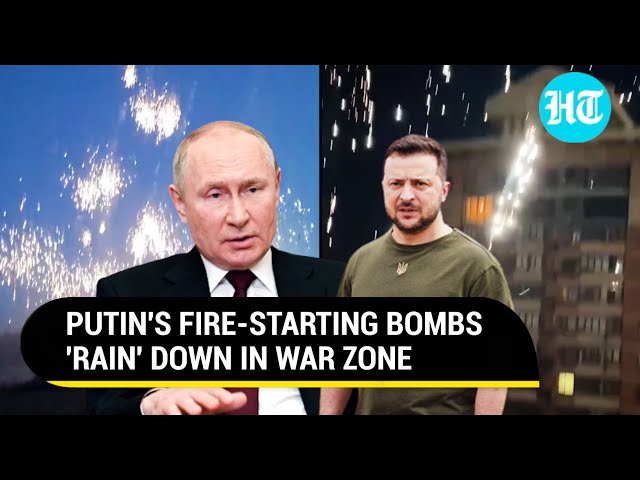 The UN’s human rights monitoring mission in Ukraine has reportedly called on Ukraine to investigate a video that allegedly shows the country’s troops executing Russian prisoners of war. This was after Moscow accused Kyiv of executing more than 10 prisoners of war. A video of the same had emerged online sparking widespread condemnation.

Incendiary munitions ‘rain’ down in battle zone. A series of countless detonations rained flaming explosives, targeting Ukrainians. Incendiary shells set fire to objects or cause burns or respiratory injury to people. Heat & fire produced through the reaction of a flammable substance. The fires produced by the weapon itself or ignited by it are difficult to contain. Impact over a broad area, incendiary weapons are often described as ‘area weapons’.

The cutting-edge T-14 Armata is President Vladimir Putin’s deadliest main battle tank. The T-14 features fully-digitized equipment & an isolated armoured capsule for the crew. The T-14 Armata tank can reportedly launch mini-drones & boasts of an unmanned turret. Since the turret is unmanned, the tank is less susceptible to anti-tank missiles. T-14 Armata – Sophisticated sensors and data networking & a high degree of automation. Pertinent to note, main battle tank’s 125MM smoothbore gun has fully automated loading. The magazine contains 45 rounds & the main gun can also fire laser-guided missiles. Additionally, the tank’s 125mm gun can be swapped out for an even bigger 152MM gun. T-14 comes with secondary weapons such as a 12.7mm machine gun or a 7.62mm machine gun. The T-14 Armata main battle tank has an operational range of over 500 kilometers. 12-speed automatic gearbox, the T-14 can hit top speeds exceeding 80 kilometers/ hour.