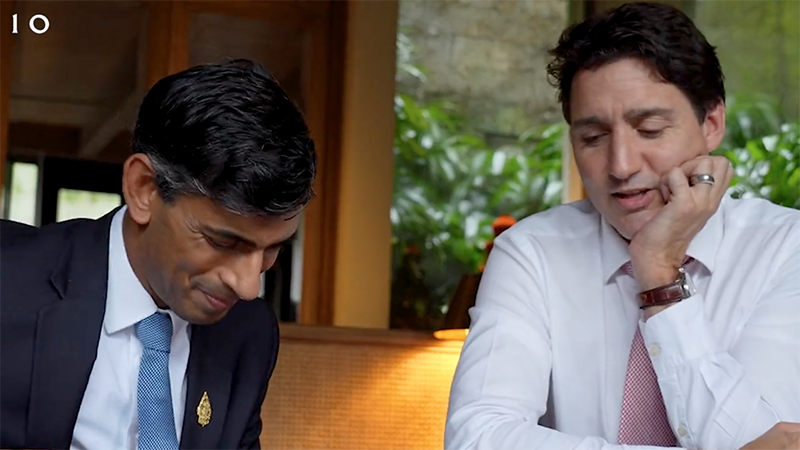 The Twitter account of the unelected British Prime Minister Rishi Sunak yesterday posted a weird edited video of him and his Canadian counterpart Justin Trudeau sycophantically fawning up to Ukrainian President Zelensky on the same day that he falsely asserted that Russia had fired missiles into Poland.

The video is edited oddly so that none of Zelensky’s responses are included. In fact, he may not have even been on the other end of the phone as far as the viewer is concerned.

The only content included is “Justin and Rishi” sucking up to Zelensky.

🇬🇧🇨🇦🇺🇦 Prime Minister @RishiSunak and Canadian Prime Minister @JustinTrudeau spoke to President @ZelenskyyUa this morning to reiterate their joint support for the Ukrainian people in the face of continued Russian brutality 👇 pic.twitter.com/HQNVpcjFo8

“It’s Rishi and Justin, I really wanted to you to hear from us as friends,” Trudeau begins before Sunak states “we absolutely know how difficult yesterday was, it was horrific for you and your country.”

What was horrific? The fact that his own missile went off course, or was purposefully sent that way, and killed a couple of Polish farmers, and then he lied about it on TV in an apparent attempt to start world war three?

“We have called it out in the session and the media this morning,” Sunak continued, describing the incident as “yet more barbarity from the Russians.”

Translation: the pair of them went along with and repeated the massive dangerous lie.

🇬🇧🇨🇦🇺🇦 Prime Minister @RishiSunak and Canadian Prime Minister @JustinTrudeau spoke to President @ZelenskyyUa this morning to reiterate their joint support for the Ukrainian people in the face of continued Russian brutality 👇 pic.twitter.com/HQNVpcjFo8

Was this before or after you realised it was a Ukrainian error.

Another cringe inducing video of Trudeau emerged from the G20 Summit showing him getting a dressing down from the Communist Chinese dictator Xi Jinping for leaking a private conversation to the media.

Trudeau basically ran away after Xi reminded him to meet “the conditions” that he expects.

Trudeau announced during the Summit that $750 million will be pumped into financing infrastructure, green initiatives, and COVID-19 vaccine initiatives. Of that total, $80 million is to be sent to a World Bank project to help countries “prevent pandemics and respond to them.”

Meanwhile, the Indonesian minister of health demanded that the G20 should coordinate with the World Health Organisation to adopt a global digital health passport framework to track vaccination status.