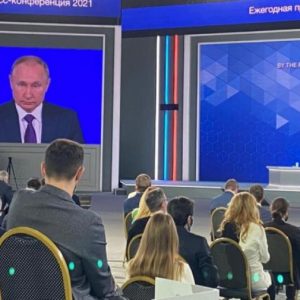 During the 1990s, Russia was completely open to cooperation, but the West responded by supporting terrorism in the North Caucasus and contributing to the further disintegration of the Russian Federation.

During his large annual press conference held on December 23, Russian President Vladimir Putin, when answering a question from a Sky News journalist about guarantees of non-aggression against Ukraine, said that Russia’s actions would depend on what steps the West would be taking further in terms of Russia’s security.

Having reiterated his vehement opposition to NATO’s further expansion to the East, Putin noted that it was the outcome of the talks with NATO, but not the process of them that was vital for Russia.

“In the 1990s, NATO promised us not to expand to the east. It was deception as NATO has had five expansion waves since then. Was it Russia that came to the borders of NATO member countries? No, it was them who came to our door. And now you are asking for some guarantees from me? It is you who should give me those guarantees — you and now, and do not drag it on for decades!” Putin said.

It appears at times that Russia and the West are living in different worlds, Putin also said.

“In the 1990s, we were completely open to cooperation — and what was the result of that? The West supported terrorism in the North Caucasus, contributed to the further disintegration of our country, then there was NATO expansion. Why were you doing it year after year, ignoring our concerns? Now we just want to ensure our own safety. No, to hell with your concerns! We will do what we think we need to do!” the Russian president said.

The prankster, known as Lexus, said the footage of the video call was only edited to keep sensitive British national...