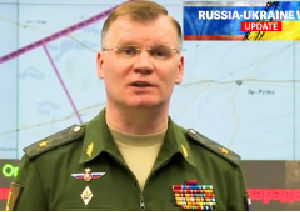 ▫️The foreign trainers who had arrived in the centre held practical exercises for Ukrainian servicemen related to using and firing control of M777 155-mm howitzers.

▫️In addition, a missile attack has resulted in destroying a permanent base of foreign mercenaries near Dachnoye, Odessa Region.

💥Russian air defence means have shot down a military transport airplane of the Ukrainian Air Force that was transporting armament and ammunition near Odessa.

📊In total, 187 airplanes and 129 helicopters, 1,104 unmanned aerial vehicles, 328 anti-aircraft missile systems, 3,406 tanks and other armored combat vehicles, 466 multiple launch rocket systems, 1,769 field artillery and mortars, as well as 3,405 units of special military vehicles of the Armed Forces of Ukraine were destroyed during the operation