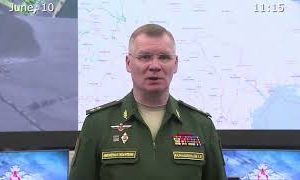 ▫️Engineering units of the Russian Armed Forces continue to clear roads and forest areas of Svyatye Gory National Park near the liberated settlements of Svyatogorsk, Yarovaya, Studenok and Sosnovoe.

▫️To date, Russian servicemen have cleared more than 5 square kilometres of territory in Yarovaya and Studenok and have found and destroyed 224 explosive devices, including 66 anti-tank mines.

💥High-precision air-based missiles at Dnepr military airfield have destroyed Ukrainian air force equipment. Production facilities of an interprise for rebuilding AFU weapons and military equipment have been destroyed near Kharkov.

▫️The attacks have resulted in the elimination of more than 150 nationalists, 6 tanks, 4 field artillery mounts and 2 Grad multiple rocket launchers.

💥Russian air defence means have shot down 2 airplanes of the Ukrainian air force during the day among them: 1 Su-25 near Dolgenkoe, Kharkov Region, and 1 MiG-29 near Ingulets, Dnepropetrovsk Region.

💥Missile troops and artillery have hit 62 command posts, 138 firing positions of artillery, as well as 303 areas of AFU manpower and military equipment concentration.