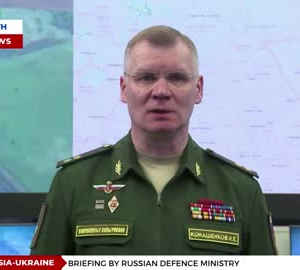 💥Russian air defence means have shot down 2 MiG-29 aircraft near Snegirevka, Nikolaev Region, and 1 Su-25 aircraft near Alexandrovka, Kharkov Region, over the past 24 hours.

💥Missile troops and artillery have hit 231 areas of manpower and military equipment concentration, 13 command posts and 42 firing positions of artillery and mortar units.


⚠️We continue to record the facts of criminal actions by the Kiev regime against civilians, as well as the use by Ukrainian armed formations of educational institutions and other social infrastructure for military purposes:

🔹in Slavyansk, Donetsk People’s Republic, the buildings of boarding school No. 1 and the High Voltage Research Institute house servicemen of AFU units (General N. Batyuk Street), weapons and ammunition depots are equipped, and MLRS are placed in the adjacent territory; Nationalist battalion fighters have equipped firing positions in schools No. 17 (Olimpiyskaya Street) and No. 9 (Kutuzova Street), and placed American-made artillery guns in the immediate vicinity of the schools;

🔹in Privol’e, Donetsk People’s Republic, AFU units are stationed on the territory of Lyceum No. 7 (Shakhterskaya Street) and School No. 29 (Lomonosova Street), while checkpoints and firing points have been equipped along the perimeter;

🔹in Pokrovsk in the Donetsk People’s Republic, neo-Nazis have equipped a stronghold in school No. 9 (Vozrozhdeniya Street), placing sniper positions and large-calibre machine guns on the top floor and heavy equipment and MLRS in the yard, while residents of nearby houses are being held in the gymnasium under the pretext of providing security;

🔹in Kostantinovka, Donetsk People’s Republic, AFU units have equipped barracks and firing positions in the buildings of schools No. 11 (Bohdana Khmelnytskogo Street) and No. 17 (Vinnitskaya Street);

🔹in Nikolaiv, on the territories of schools No. 40 (Baltiyskaya Street), No. 43 (Bohoyavlensky Avenue) and Lyceum No. 25 (Aivazovsky Street), AFU servicemen have equipped mortar emplacements and weapons and ammunition depots;

🔹in Dnepropetrovsk, Ukrainian nationalists have equipped strongholds and ammunition depots in the building of School No. 35 (Naberezhnaya Pobedy Street) and in Pershovensk in Dnepropetrovsk Region and on the territory of a church (Molodezhnaya Street).

▫️These facts once again demonstrate the Ukrainian authorities’ complete disregard for the norms of morality and the provisions of international humanitarian law.

▫️This is happening with the tacit consent of the countries of the so-called collective West, which continue to turn a blind eye to the numerous war crimes of the Kiev regime.