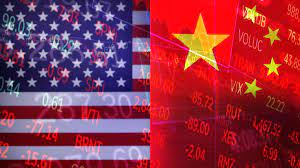 Multiple analysts at Chinese state-linked think tanks and banks have weighed in on the Biden administration’s recent threats to punish the world’s second-largest economy over China’s refusal to condemn Russia’s war in Ukraine, and amid US charges that it could be helping Moscow evade sanctions, or even quietly resupplying Putin’s military machine (charges which at this point have remained without evidence).

“It is necessary to speed up the construction and external connection of the cross-border yuan clearing system CIPS … [But] the primary choice is to continue to strengthen cooperation with Swift,” Wang Yongli, a former vice-president with the Bank of China and a former board member for Swift, was cited as saying in a fresh South China Morning Post report this week.

However, China is taking note and studying its own preparedness and future options in the wake of the US drastic measure of freezing Russia’s central bank assets overseas. On this, Yongli underscored to the SCMP that “The huge foreign exchange reserves are hard-won, and they are China’s ‘financial nuclear bombs’ with a powerful deterrent effect. It must be used properly rather than arbitrarily, and cannot be easily slashed.”

Officials in Beijing are putting counterparts in Washington on notice – pointing out that “China is no Russia” given China’s immensely larger role in nearly every facet of the global economy. They’ve also said that any potential Taiwan reunification scenario with the mainland would not be like Russia-Ukraine, and yet it’s understood well due to the current crisis and the West’s anti-Russia sanctions constitute a “textbook warning for China”:

“The expansive economic sanctions that US-led Western countries have imposed on Russia can be seen as a textbook warning for China – on how far [the sanctions] can go,” said He Weiwen, former economic and commercial counsellor at the Chinese consulates in New York and San Francisco.

The SCMP report lists a number of short and long-term strategies being mulled in a crisis scenario with the West, predicated on geopolitical factors like a showdown over Taiwan.

For example, “China has been stepping up efforts to diversify its foreign exchange reserve assets in the past two decades, according to data from the State Administration Of Foreign Exchange.” The report recommends, “One countermeasure China can take is to expand its economic and financial opening up to the outside world, and encourage foreign investors to hold more Chinese assets, according to Chinese government advisers.”

“China and the US have a stake in each other, so for the US, China is totally different from Russia. The political calculations will inevitably be restrained by economic conditions.”

Lu Xiang, a senior fellow with the Chinese Academy of Social Sciences (CASS), also said that if the same sanctions were levied against China, they would have unintended consequences for the nation or global bloc imposing them.

“The effects of any sanctions are mutual,” Lu said. “We have assets in the US and Europe, and so do they in China.”

“Some US sanctions will inevitably remain in place, and perhaps more will come, but the unfolding of the sanctions will follow its original pace,” according to Shi Yinhong, an international relations professor at Renmin University and an adviser to the State Council, the country’s cabinet.

“A sharp and sudden escalation is quite unlikely,” Shi said.

“The United States is now playing with ambiguity,” a Beijing-based foreign diplomat was quoted as saying. “China also wants to know, clearly, under what specific circumstances it would be sanctioned.”

Accordingly, the Chinese government, along with state-owned banks and enterprises that have business relations with Russia, have been adopting a very prudent approach since the war began, according to Professor Shi with Renmin University.

“Such a Western attitude [towards Russian aggression] has probably been fully anticipated by China, so to protect Chinese assets, I think so far, China has been acting very cautiously,” Shi said.

According to the report, “There has been talk inside China of slashing its huge holding of reserves, but experts say this is not feasible, as a sudden change in the volume could have catastrophic consequences in global markets.”

Wang Yongli explained, “…Of course, this does not rule out China increasing its purchase of gold or other strategic materials, or adjusting the currency and country composition of foreign exchange reserves, to further reduce its US dollar reserves, but we avoid this as much as possible to use it as a means of confrontation with the US.”

Read the rest of the SCMP report here.

Just as the the United States and its allies created an existential threat to Russia through the transformation of Ukraine...

Following the release of the report on the indiscriminate cyberattack launched by the US National Security Agency’s APT-C-40 group over...