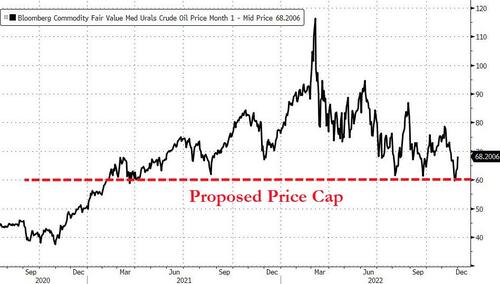 European leaders are scrambling again in a relentless pursuit to price cap Russian crude oil imports before a ban on purchases goes into effect Monday. There has been a disagreement between member states at what price level that cap should be.

Recall last Friday, EU negotiations on the Russian oil price cap were suspended – despite a willingness by most member states to propose a ceiling of $65 a barrel, though Poland and the Baltic states objected. Earlier this week, there was still disagreement on $62, and now people familiar with the matter tell WSJ the European Commission has discussed lowering the limit to $60 — in hopes all 27 member states will agree.

An agreement on the cap at the new level would be significantly below benchmark Brent prices, which traded around $89 a barrel Thursday morning.

Countries such as Poland, Estonia, and Lithuania have argued that proposed price caps were too high and would allow Russia to continue profiting off international crude markets to fund the war in Ukraine.

WSJ noted senior officials of various member states began discussing the $60 ceiling on Thursday afternoon, and a decision could come as soon as this evening, with the officials saying Polish officials needed time to examine the commission’s plan with Warsaw.

But even at $60, the price cap could be meaningless because Russia’s production costs are estimated at around $20.

Russian crude on international markets already trades at a significant discount to Brent. According to Argus Media, on Wednesday, Russia’s Urals were priced at around $48 a barrel at the Baltic port of Primorsk.

Furthermore, according to Bloomberg data, China and India are currently buying Russia’s flagship Urals crude oil at a massive $33.28 discount to Brent.

However, summing it all up – the concept of a price cap is meaningless, as explained in “The Ridiculous Reality Of The Russian Oil Price Cap Debate In One Picture.”

The last months have seen broad-based disagreement on where the level should be – not too low as to really hurt Russia (as to prompt retaliation), and not too high to show that European nations are terrified of actually poking the bear. It appears all about virtue-signaling yet again…

And then there’s the risk that Russia could refuse to sell its oil at prices below the cap, thus reducing global supplies that could send prices higher. Kremlin spokesman Dmitry Peskov warned last week countries that impose a price cap could be cut off from Russian crude and crude products

“It feels like they are just trying to make a decision for the sake of a decision. For the time being, we proceed from the directive of President Putin, that we will not supply oil and gas to those states that will introduce and join the ceiling. Of course, we must analyze everything before formulating a position,” Peskov said.

EU member states are forced to choose between two priorities that are almost impossible to resolve: trying to choke off revenue to Russia and avoiding potentially painful spikes in the oil price that could damage the global economy.

The price cap is part of the West’s crusade to squeeze Moscow though many of the sanctions this year have backfired and sparked an energy crisis worldwide.