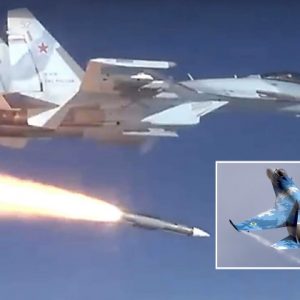 On the evening of March 5 it was reported that the Ukrainian Air Force had taken unprecedented losses in air to air engagements, with Russian ground based air defences shooting down an Mi-8 helicopter, Su-25 attack jet and Bayraktar drone while four of Ukraine’s top fighters, the elite Su-27 Flankers, were lost near the city of Zhytomir in the country’s western regions. It was implied that the Su-27s were shot down by Russian aircraft, although this remains uncertain. The engagements of March 5 represent a significant escalation of the air war between Russia and Ukraine, with the former having refrained from making extensive use of its air force since initiating a campaign in Ukraine on February 24. The engagement marks the first confirmed loss of a Su-27 in air to air combat, which was widely considered the most capable fighter fielded by any air force during the Cold War era and from 1985 had formed the elite of the Soviet Air Force. While it remains uncertain which Russian assets were responsible for shooting down the fighters, this can be speculated based on where the engagement took place and the forces Russia has available.

Having taken significant losses, including to friendly fire and to Russian missile strikes on its airfields, the Ukrainian Air Force has increasingly relegated its relatively small fighter fleet to patrolling the county’s western regions. An engagement over Zhytomir, where Russian ground units are not known to be operating, was thus likely initiated by the Russian Air Force as an escalation of the air campaign, with its demonstration of overwhelming superiority potentially grounding the Ukrainian fleet. The large majority of Russian fighters are capable of comfortably prevailing in an air to air engagement with Ukrainian Su-27s, as although the fighter had an elite status when it was first commissioned Ukraine has invested very little in modernising the airframes since the Soviet era leaving them effectively obsolete. Russia’s Su-35 air superiority fighter, its more well balanced Su-30SM multirole fighter, and Su-34 strike fighter, would all potentially be capable, as would its Su-27SM2/3 air superiority fighters which are Su-27s with weaponry, avionics and sensors modernised to Su-35 standards in the 2010s. Nevertheless, it is likely that the Su-35 would have been chosen to contest air superiority against the Ukrainian jets for a number of reasons.

Ukrainian Su-27s, although old and flown by pilots who enjoy few hours of flight training, are still potentially dangerous and represent one of the more capable fighters deployed by an Eastern European country. The Su-35, which enjoys the largest performance advantage over them as Russia’s prime air superiority fighter, would thus be the most likely fighter to be deployed to tackle them and more comfortably ensure superiority. The fact that Russia’s most experienced pilots are thought to be assigned to the aircraft is another notable factor. Su-35s are deployed in significant numbers under Russia’s Western Military District, and some were even redeployed from the country’s Far Eastern regions to Baranovichi Airfield in Belarus in January which would have been well positioned to operate over Zhytomir from the north. The Su-35 entered service from 2014, and is based on Su-27’s airframe but with under a third of the radar cross section, new AL-41 engines putting out 17 percent more power, an Irbis-E radar with 500 percent the detection range, and strong improvements in all areas of performance ranging from electronic warfare and data links to armaments and endurance.

Although Russia fields newer fighters than the Su-35 which are also well optimised for air to air combat, namely the Su-30SM2 which pairs the Su-30SM’s airframe with the Su-35’s engines, and the Su-57 next generation fighter, the former has only been in service for a number of weeks while the latter is not considered fully combat ready. Thus neither are ideal for such operations. If Russia did indeed deploy Su-35s, it is likely they relied on R-77-1 active radar guided missiles with an estimated 110km engagement range which entered service from around 2015. The missiles are far from the most capable for long range engagements in Russian service, those being the K-77M and R-37M, although neither of these have been widely deployed by Su-35 units meaning reliance on the older R-77 remains likely. With Ukraine lacking any active radar guided air to air missiles whatsoever, and its ageing R-27 missiles having Soviet era electronic warfare countermeasures, the R-77-1 would likely be sufficient to comfortably secure superiority. Another possibility remains that, although it was implied otherwise, the Su-27s were shot down by Russian ground based air defence systems. No long range systems have been observed in Ukraine capable of neutralising targets near Zhytomir from current Russian positions, however, indicating that the four jets from the Ukrainian elite were likely brought down from the air.

Source: Four Su-27 Flankers Shot Down Over Western Ukraine in March 5 Battle: Which Russian Asset Could Have Done It? (militarywatchmagazine.com)