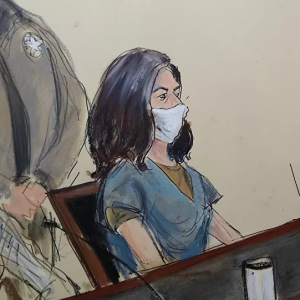 Jeffrey Epstein’s former girlfriend and pal Ghislaine Maxwell has pleaded not guilty to sex trafficking and perjury charges despite an avalanche of claims that she helped the financier abuse dozens of girls in the past. Her trial is currently scheduled for November.

A New York judge has ordered federal prosecutors to reveal the “identities of any unnamed co-conspirators” they are going to reference in Ghislaine Maxwell’s upcoming trial, the New York Post reported, citing the Friday ruling.

Maxwell, who is currently held at the Metropolitan Detention Center in Brooklyn, has asked the government to disclose the names of people the feds had described in their indictment against her to give the socialite a fair chance to prepare for her upcoming trial in November.

But prosecutors claim that the revelation would bring “potential danger to co-conspirators” or compromise “continuing investigations”.

However, Judge Allison Nathan ruled on Friday that the government’s claim didn’t make any sense.

“The Government provides no explanation for this purported harm and none is apparent to the Court,” the New York southern district judge wrote. “Thus, the Court finds that this concern alone does not outweigh the risk of surprise to the Defendant in this case or the need for the parties to litigate co-conspirator issues in advance of trial to ensure the absence of delay.”

Not only identities, but the “all co-conspirator statement” the feds plan to offer at the trial now have to be unveiled, Nathan demanded.

The order will help Maxwell to “adequately prepare her defences”, the judge added.

Ghislaine Maxwell appears via video link during her arraignment hearing where she was denied bail for her role aiding Jeffrey Epstein to recruit and eventually abuse of minor girls, in Manhattan Federal Court, in the Manhattan borough of New York City, New York, U.S. July 14, 2020 in this courtroom sketch

Maxwell has been repeatedly denied bail despite her legal team’s claims that her “horrific” prison conditions have compromised her chances for a fair trial that is set to begin on 29 November.

Prosecutors earlier claimed in a letter to US federal court in New York that the socialite had used a cart with legal documents to “barricade” herself in the video conference room at the Metropolitan Detention Center, which she used for meetings with her defence council. After the apparent incident, Maxwell was forbidden to bring the trolley into the room.

Maxwell, 59, is facing eight counts of sex trafficking of a minor, sex trafficking conspiracy and lying about the incident during a 2015 defamation case filed by Epstein’s accuser Virginia Roberts Giuffre.

An investigation into the mysterious death of former President Bill Clinton’s adviser Mark Middleton has been reopened, but the details...

The lead investigator for the House Intelligence Committee’s 2018 probe into the FBI’s investigation of alleged Trump–Russia collusion, Kash Patel, said...