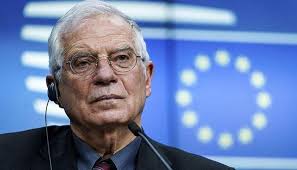 As a result of the Fed’s relentless tightening blitz, which on November 2 will have hiked rates by 75bps on four occasions in just 96 trading days, the fastest tightening campaign since Volcker, both US capital markets (the S&P 500 is down -24%, for the 4th worst year on record, only 1931, 1974, and 2002 were worse; and 10Y TSYs are down -17% for the worst year on record… 1987 second worse, and bonds were down -10%) and the US economy have been left reeling.

However, the damage in the US – whose economy is relatively isolated from the knock-on (or is that out) effects of the soaring global reserve currency – are nothing compared to the devastation unleashed by the Fed in the form of the soaring dollar and exploding interest rates. And yet the outcry against either the Soros Biden administration, or chair Powell has been relatively muted (excluding the occasional scathing oped in China’s Global Times and fake populist rage-tweet by everyone’s favorite “native American“, Liz Warren). To be sure, this was to be expected: after all, the last thing central banks need, when they are seeking to effect an extremely unpopular global economic recession that will leave millions without a job (think inflation is bad? just wait until you have no job and inflation is still bad) is growing discord among the ranks of the technocrats who have a simple script: no matter how unpopular or stupid a given policy is, you never, never, disagree in public, as this risks sparking popular outrage and toppling the entire house of cards at the hands of a suddenly very angry public.

At least that was the case until now: because today, in a startling outcry breaching the unspoken protocol of “no dissent, never dissent”, Josep Borrell, the high representative of the 27-member EU bloc, lashed out all too publicly at the Fed when he said that central banks (across Europe where the recession will be far, far worse than in the US) are being forced to follow the Fed’s multiple rate rises to prevent their currencies from slumping against the dollar, and compared the US central bank’s influence to Germany’s dominance of European monetary policy before the creation of the euro.

Of course, back then the solution to the super deutsche mark was simple: pool all nations under a common currency umbrella, even if it means misery for the less productive, and less mercantilist countries (hence the neverending European sovereign debt crisis which remains in hibernation only thanks to the ECB’s bond buying). This time however, there is no simple solution taking advantage of gullible states, instead now that they’ve broken the seal of silence, the “leaders” of Europe admit to just how powerless they truly are when the custodian of the world’s reserve currency has to do what’s best only for itself, allies and friends be damned:

“Everybody has to follow, because otherwise their currency will be [devalued],” Borrell said to an audience of EU ambassadors, the FT reported. “Everybody is running to increase interest rates, this will bring us to a world recession.”

The comments which the FT defined as “unguarded” but were are confident were very much pre-cleared with all the proper officials, came in a wide-ranging speech in which he also criticized the EU for failing to listen to foreign countries and seeking to “export” its governance model and standards on to others, and admitted that the bloc failed to anticipate Russia’s full-scale invasion of Ukraine despite what the FT called “warnings from Washington”, because of course for the FT to mention Trump, or heaven forbid, admit he was right, would be inconceivable.

Borrell’s carefully chosen words on US monetary policy followed the World Bank’s warning last month that rate rises by multiple central banks could trigger a global downturn in 2023, as it argued the “degree of synchronicity” by central banks was unlike anything seen in five decades.

Yes, the artificial facade of calm agreement propping up the world’s most aggressive tightening cycle in history is starting to crack and quite violently at that.

Borell’s warnings come as the World Bank and IMF kick off a week of joint meetings in Washington, where officials will discuss the multiple threats to the global economy. The fund is expected to downgrade its global economic forecasts for the fourth consecutive quarter.

And as a growing chorus of angry voices rises to warn the Fed against even more aggressive tightening, it appears that the message is finally seeping through: top Fed officials have recently more directly acknowledged that their campaign to tighten monetary policy risks creating “spillovers” that could jeopardize weaker economies, and all other economies too. But they underscore that their chief concern remains bringing US inflation under control, suggesting that the global ramifications of their plans are secondary considerations.

Maybe not: Lael Brainard, vice-chair of the Fed, on Monday said that while the US central bank should continue raising rates it must do so “deliberately and in a data-dependent manner” due to “elevated global economic and financial uncertainty”. Her comments were enough to push risk assets sharply off their session lows, even if they have since slumped back.

She added that the Fed “takes into account the spillovers of higher interest rates, a stronger dollar, and weaker demand from foreign economies”. Last month she highlighted the risks posed to highly indebted emerging markets as borrowing costs rapidly rise.

As the FT notes, the Fed’s crushing influence over current monetary policy trends mirrored the situation in Europe before the euro, when countries were forced to follow the policies of Germany’s Bundesbank, said Borrell. “You had to do it. Even if it was not the right policy for your internal reasons.” Of course, the alternative, the Euro was an even worse disaster: at least in the DEM days, European countries could devalue their way out of a fiscal crisis; with the common currency they all have to beg the ECB for bond-buying mercy or else be forced to install another pro-European puppet prime minister.