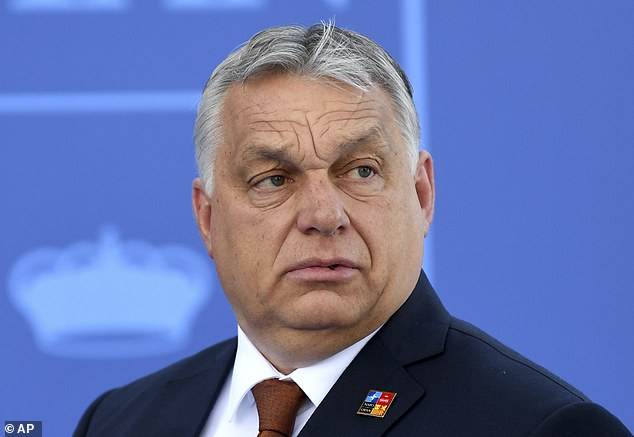 During his speech, Orban argued that the ‘West is split in two,’ with one half being the countries where Europeans mix with non-Europeans, the Daily News Hungary reported. ‘Those countries are no longer nations,’ he added, pointing to Western Europe.

The PM added that those countries ‘continue to fight central Europe to change us to be like them’.

‘In a spiritual sense, the West has moved to central Europe,’ Orban added.

Orban, who was re-elected with a landslide victory in April, has ruled Hungary since 2010 and brought in ‘illiberal’ reforms based on the ‘defence of a Christian Europe’.

The Hungarian premier has targeted migrants from Africa and the Middle East, as well as NGOs that support them, restricting the right to seek asylum and putting up barriers at borders.

The European Court of Justice has condemned Hungary several times as a result.

Orban, who is an ally of Russian President Vladimir Putin, also said in his speech that Western sanctions against Russia have failed and that the war in Ukraine will not end ‘until there is a Russian-U.S. peace negotiation.’

Orban has condemned Russia’s invasion of Ukraine in February, but maintains an ambiguous position on the conflict.

Before Moscow sent in troops, he had sought close ties with Russia’s President Vladimir Putin. And last week, he said Europe had ‘shot itself in the lungs’ by imposing sanctions against Moscow over the military operation.

Orban said that ‘a new strategy is needed which should focus on peace talks . instead of winning the war.’

‘The situation is that today we are sitting in a car with flat tires on all four wheels,’ he said. ‘It is quite obvious that the war cannot be won this way. Ukrainians will never win a war against Russia with American training officers and weapons.’

Orban said ‘only Russian-US talks can put an end to the conflict because Russia wants security guarantees’ only Washington can give.

The EU, he added, ‘should not side with the Ukrainians, but position itself’ between both sides.

The sanctions ‘will not change the situation’ and ‘the Ukrainians will not come out victorious’, he said.

He said: ‘The more the West sends powerful weapons, the more the war drags on’.

The leader went on to say that had Donald Trump and Germany’s Angela Merkel still been in charge in their countries, ‘then this war would never have broken out.’