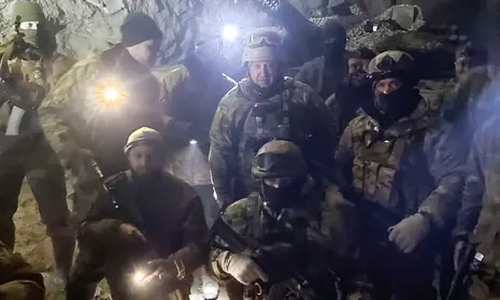 The head of the private Russian military firm Wagner Group has announced pro-Moscow forces have taken control of the town of Soledar in the eastern Ukrainian region of Donetsk. Wagner chief Yevgeny Prigozhin admitted in a series of Tuesday and Wednesday comments that fighting in the area is still ongoing, but said “Units of the Wagner private military company have taken the entire territory of Soledar under their control,” and that the Ukrainians are surrounded.

“The city center has been surrounded, and urban warfare is underway. The number of captives will be announced tomorrow,” Prigozhin added. “No units other than Wagner PMC fighters were involved in the storming of Soledar.” The Amsterdam-based Moscow Times and the AFP underscore that “If confirmed, the capture of Soledar would mark Russia’s biggest success in its war on Ukraine following months of retreats elsewhere.” Prigozhin’s emphasis that it was ‘only Wagner’ an no regular forces that stormed Soledar has reportedly unleashed anger and controversy inside the Russian chain of command.

Britain’s Ministry of Defence (MoD) acknowledged in a Tuesday daily briefing that the majority of Soledar is arlready under Russian control.

“Part of the fighting has focused on entrances to the 200km-long disused salt mine tunnels which run underneath the district. Both sides are likely concerned that they could be used for infiltration behind their lines,” the MoD briefing described.

Control of Soledar, a small town of 10,000 (pre-war) known for its immense salt mines, is seen as especially strategically key to Russian forces seeking to encircle the city of Bakhmut, which has witnessed months of intense but stalemated fighting. Bakhmut is 15km away from the outlying town of Soledar.

Wagner troops have been photographed inside the famous salt mines, following what state media described as “fierce fighting”. The firm also said it has taken many Ukrainian troops captive. There are also reports of large below-ground ammunition stores discovered there.

Reuters details the immensity of the mines, which is the largest in Eastern Europe, in the following:

Soledar is also home to cavernous salt mines that are owned by state-owned enterprise Artemsil, which completely dominated the Ukrainian market until it halted production a few months after Russia invaded. The enterprise has produced more than 280 million tonnes of salt since it was founded in the late 19th century. The mines go down to a depth of 200-300 metres and have tunnels with a combined length of 300 km (186 miles), according a local tourist website.

The enterprise was once considered one of the largest in Eastern Europe and exported salt to 20 countries. A hot air balloon was once flown inside one of the mines to demonstrate their depth.

The Kremlin confirmed that Russian army airborne troops have been assisting by blocking Soledar’s far northern and southern access parts, but officially the Kremlin has been slower to declare full victory as of yet.

“Let’s not rush. Let’s wait for official announcements,” Kremlin spokesman Dmitry Peskov said while hailing the “positive dynamic in advances” due to the “heroism of our fighters.” He stressed that “Tactical successes, of course, are very important.”

This Kremlin reaction, which crucially didn’t mention Wagner at all, is being taken by Western press as somewhat of a humiliating blow to the private military firm with direct links to Putin, and seems an attempt to walk back potentially premature ‘full victory’ claims amid the intense ebb and flow of ongoing urban warfare.

PMC Wagner inside the ancient Salt mines in Soledar, which is a treasure in and of itself – an abundance of natural mineral salt and a large cache of ammunition all left by the AFU. pic.twitter.com/jxRSPbqDBO

“Airborne Force units have blocked Soledar from the town’s northern and southern parts. The Russian Aerospace Forces are delivering strikes at enemy strongholds. Assault groups are engaged in a battle in the town,” Peskov continued.

Interestingly his bolstering of Russian regular forces’ contributions comes at a moment of reported tension between Wagner and the defense ministry. Wagner seems to have been given a carte blanche mandate in how it operates, naturally putting the elite group on a collision course with the army’s chain of command, creating distrust.

The Ukrainian government is meanwhile downplaying Russian gains in and around Soledar, rejecting the Wagner assertions of victory. “Soledar was, is and will be Ukrainian,” a Ukrainian military statement said.

The statement denied that its forces had surrendered the town as of yet, and went so far as to claim that the Wagner photographs from within the salt mines were faked.

However, RT is on Wednesday circulating video of the Wagner mercenaries clearly inside large, cavernous salt mines.

Just as Wagner announced the capture of Soledar, Z forces struck a firework warehouse in Kharkiv. This has been confirmed by the governor. pic.twitter.com/2042udtwHC

The afforementioned founder of Wanger Group Prigozhin, also nicknamed “Putin’s chef”, previously described the strategic importance of the salt mines in particular, in relation to the larger city of Bakhmut:

“Bakhmut is the central point of the Eastern Front and a serious logistics center. And our task there is to die as little as possible, and to destroy the enemy as much as possible. Bakhmut’s feature is in its unique historical and geographical defense capabilities, which include, first, the division of the city into several parts by water barriers. Secondly, the neighborhood of Bakhmut is a complex of settlements that create a unified defense system.

Thirdly, this is a unique landscape, ravines and heights, which are natural tunnels. And the icing on the cake is the system of Soledar and Bakhmut mines, actually a network of underground cities. In which there is not only a cluster of people at a depth of 80-100 meters, but also tanks and infantry fighting vehicles move. And stockpiles of weapons have been stored since the First World War.”

At the start of this week, on Sunday, Ukrainian President Vladimir Zelensky admitted that the situation of his forces in Soledar was “very difficult”.

He described it as “one of the bloodiest spots along the front line,” while vowing Ukrainians would fight to hold the town “no matter what.” At this point reports from both sides have acknowledged heavy casualties as they fight for control over this key area of Donetsk.

(You can cancel at any time).
Insoledar, Wagner Group