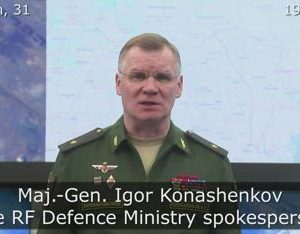 Units of the Lugansk People’s Republic continue their offensive on the outskirts of Severodonetsk, advancing 2 km deep into the defence of the 57th Separate Motorized Infantry Brigade. More than 40 Ukrainian brigade personnel, 3 IFVs, 3 vehicles of various purposes and 2 field depots for missile and artillery weapons were destroyed.

▫️The grouping of troops of the Donetsk People’s Republic, continuing an offensive, has taken control of part of Novobakhmutovka. They are fighting units of 25th Ukrainian Airborne Brigade on the outskirts of Novoselovka II. During the day, more than 50 nationalists, 1 tank, 4 IFVs, 1 field ammunition depot and 1 fuel convoy of five vehicles were destroyed.

✈️💥During the day, operational-tactical and army aviation hit 28 military assets of the Ukrainian Armed Forces. Among them: 4 command posts, 3 field depots of missile and artillery weapons, as well as 6 areas of military equipment concentration.

❗️On the morning of March 31, the Kiev regime attempted to evacuate the command staff of the Ukrainian nationalist Azov regiment from Mariupol by 2 Mi-8 helicopters.

▫️1st Ukrainian Mi-8 helicopter was shot down by a crew of portable anti-aircraft missile system of the People’s Militia of the Donetsk Republic, using a trophy US Stinger system, and crashed near Rybatskoe.

▫️2nd Ukrainian Mi-8 – damaged by a missile hit, dodged towards the sea, but crashed 20 kilometres off the coast.

📊In total, 124 aircraft and 80 helicopters, 345 unmanned aerial vehicles, 1,826 tanks and other armored combat vehicles, 195 multiple launch rocket systems, 702 field artillery and mortars, as well as 1,704 units of special military vehicles of the Armed Forces of Ukraine were destroyed during the operation.