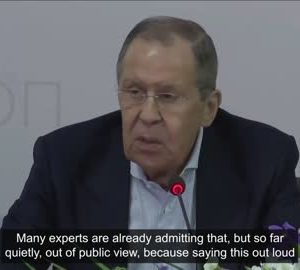 Russian foreign minister says it is hard to predict how long confrontation will last, but that its aftermath will be felt “by everyone.”

The West has launched an “all-out hybrid war” against Russia, and Moscow is ready to respond, Russian Foreign Minister Sergei Lavrov has stated in his address to the Council on Foreign and Defence Policies independent think tank.


He added that the West’s actions have largely determined the path that Russia will take in the near future.

“The choice that we are making, that we’ve practically made already, was prompted by the West launching an all-out hybrid war against our country. […] We did all we could to avoid the confrontation, but Russia accepts the challenge. It’s not like sanctions are something new to us – they have been in place in some sense practically for the entire time”, he said.

West’s “total hybrid war” on Russia will affect everyone, can’t predict how long will last: Lavrov

According to the foreign minister, it is hard to predict how long this confrontation will last. At the same time, he expressed confidence that its aftermath will be felt “by everyone”.

Lavrov further stressed that Russia is currently at a historic crossroads akin to 1991, when the USSR ceased to exist, and 1917, when the October Revolution brought the Bolshevik Party to power. He noted that the path chosen today will determine Russia’s place in the new world order.


Western countries imposed several rounds of new sanctions against Russia following its decision to launch a special military operation in Ukraine on 24 February. Russian President Vladimir Putin described its goals as the demilitarisation and de-Nazification of Ukraine, as well as ending Kiev’s “genocide” of the Donbass people. The Kremlin has also repeatedly accused the West of trying to turn Ukraine into an “anti-Russia project” starting with its backing of the 2014 coup which brought nationalist forces to power.