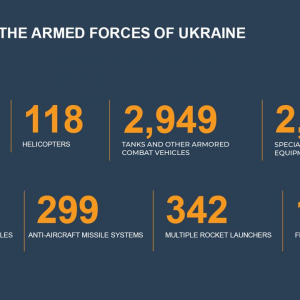 ✈️💥Operational-tactical and army aviation have neutralised 52 manpower and military equipment concentration areas, as well as 1 ammunition depot near Glukhov.

▫️The attacks have resulted in the elimination of up to 350 nationalists and the neutralisation of 56 units of military equipment.

▫️3 Ukrainian unmanned aerial vehicles, including one Bayraktar-TB2, have been hit over Snake Island.

▫️3 projectiles of Smerch multiple rocket launcher have been intercepted near Izyum and Snezhkovka.

📊In total, 160 aircraft and 118 helicopters, 783 unmanned aerial vehicles, 299 anti-aircraft missile systems, 2,949 tanks and other armored combat vehicles, 342 multiple launch rocket systems, 1,423 field artillery and mortars, as well as 2,769 units of special military vehicles of the Armed Forces of Ukraine were destroyed during the operation.

In Ukraine, another rally of women protest against Zelensky’s regime

Bypass the big tech censors by signing up to the Russia Truth newsletter and get regular anti-NWO, pro-Russia news and updates –
Please support us by following our social media:
Contributor posts published on Russia Truth do not necessarily represent the views and opinions of Russia Truth, and are not selected, edited or screened by Russia Truth editors.