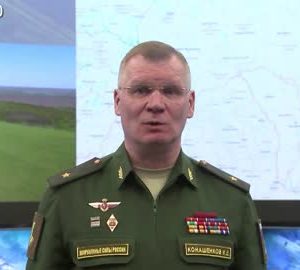 ▫️The attacks have resulted in the elimination over 120 nationalists and 13 armoured and 12 vehicles of various purposes.

✈️💥Operational-tactical and army aviation of the Russian Aerospace Force have hit 16 areas of AFU manpower and military equipment concentration.

💥Missile troops and artillery units have hit 33 command posts, 407 areas of manpower and military equipment concentration, as well as 5 ammunition and fuel depots near Nikolaev and Mirnyi, Nikolaev Region.

▫️The attacks have resulted in the elimination of more than 380 nationalists and up to 53 armoured and motor vehicles.


💥On the evening of May 9, 1 Su-25 aircraft of the Ukrainian Air Force have been shot down during an aerial battle near Novaya Dmitrovka, Kharkov Region.

🎆 Artillery salutes erupted across Russia. More than 70 self-propelled launchers and more than 11,000 fireworks were used for the festive salute and fireworks display in Moscow (https://t.me/mod_russia_en/1545).

📃 The President signed Executive Order (https://t.me/mod_russia_en/1518) On Additional Measures of Support for Families of Servicepeople and Personnel of Certain Federal Agencies.

📹 Footage of the Army Aviation combat operations (https://t.me/mod_russia_en/1526) during the special military operation has been published.

🗂 Russian Defence Ministry (https://t.me/mod_russia_en/1439) launched multimedia section ‘At the mercy of deprived unconsciousness’ dedicated to crimes of Ukrainian authorities against historical memory of fraternal peoples, the destruction and desecration of memorials and monuments in Ukraine and attempts to obscure heroism of Red Army soldiers and commanders.

Powerful explosion after a missile attack on the mall in Odessa

There is evidence that the Riviera shopping and entertainment center was used by TerOborona militants and the Armed Forces of Ukraine as a base and warehouse for storing weapons and ammunition.

Militants of the 101st Territorial Defense Brigade (TrO) from the Transcarpathian region complain that they were sent to the front line in the LPR. According to them, the formation was created to protect checkpoints in the rear and is not intended for combat operations.

The militants have no military training. Many of them complain about health problems. The militants believe that they will become a target for Russian artillery.

It should be noted that the units of the 101st Troop Brigade were transferred to the front line only three days ago, but they are already experiencing problems with morale.

Recall that today was also a protest action organized by relatives of militants from the 103rd Troop Brigade from the Lvov region.